6 Reasons Why VOLTA by Cirque Du Soleil Will Captivate and Amaze You!

VOLTA by Cirque Du Soleil is a phenomenal circus experience you will absolutely want to take your kids to see!

We were given complimentary tickets in order to review this show, but this review is our honest opinion.

Mesmerizing. Stunning. Captivating. Those are just a few of the adjectives that have been used to describe VOLTA, one of the more recent Cirque Du Soleil shows.

I wasn’t sure what to expect since most of my circus experiences have involved motorcycles zooming around a cage and lots of animals. But within minutes I realized exactly why the old (and not animal friendly) model of circus entertainment came to an abrupt end.

Here are 6 reasons you will absolutely want to snag tickets to VOLTA as soon as possible. 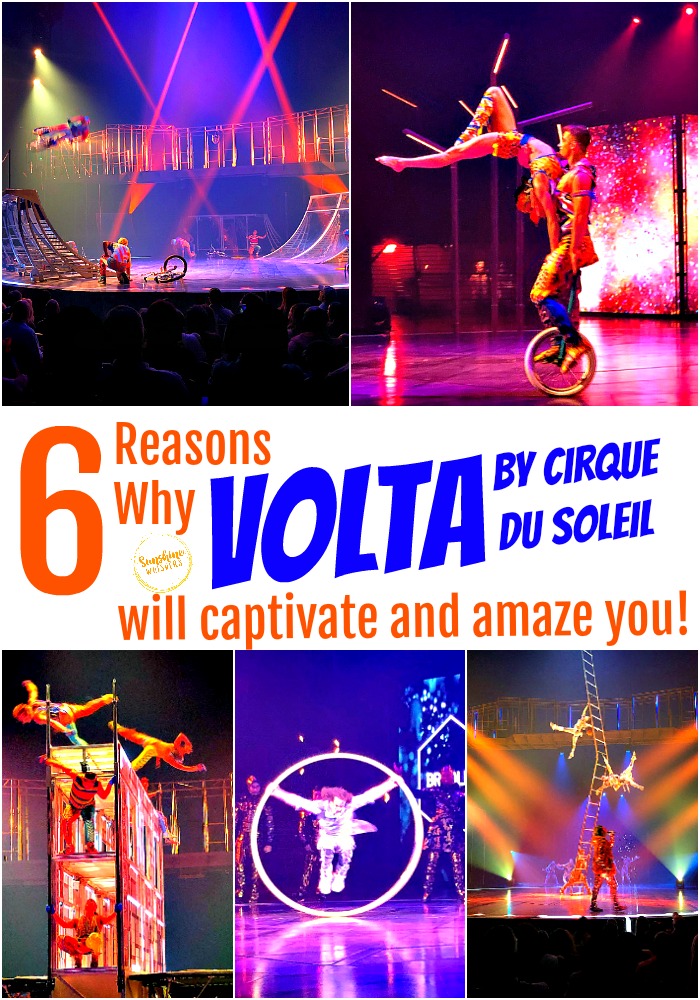 1. What is the story of Cirque du Soleil Volta?

VOLTA tells the story of a young man named Waz, who is different because he has blue hair. Waz, in search of acceptance, competes in a talent show called, ‘The WOW Show’ (see what I did there?). This is the catalyst for his journey to discover self-acceptance. 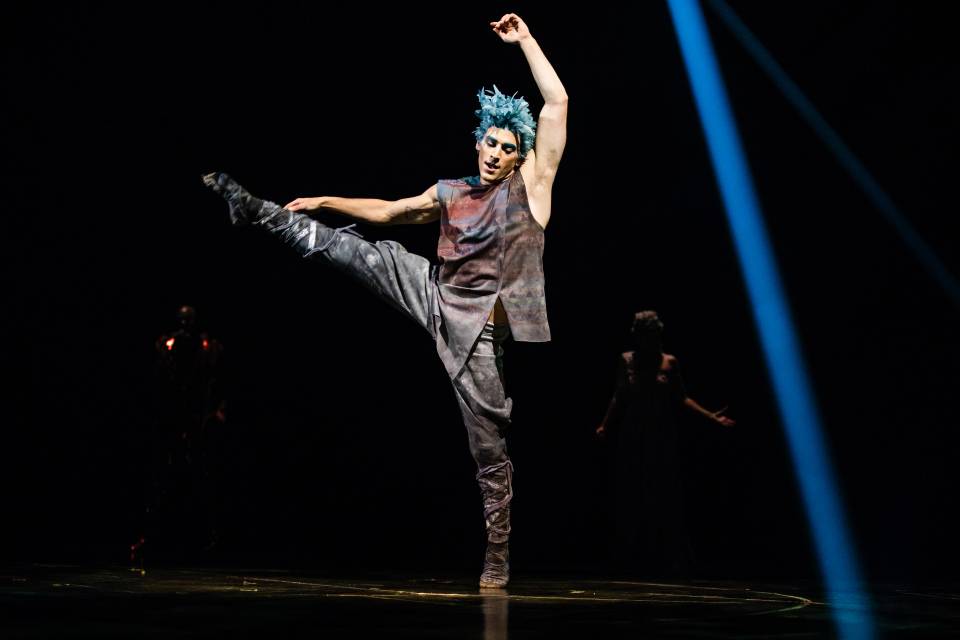 The story was actually a pretty important part of the show and even my 7 year old followed along. It served as a great theme to tie the acrobatic elements together.

The acrobatics were amazing (of course). There are numerous acrobatic parts of the show. We loved the acrobatic troop that jumped through pretty much anything put in front of them. 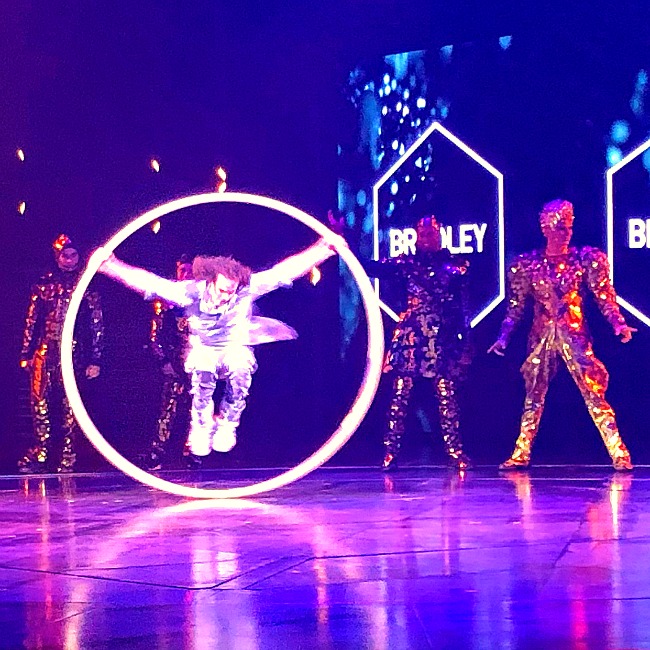 There was a roller-skating guide who seemed to help Waz find himself. And this unicycle pair was amazing as well. 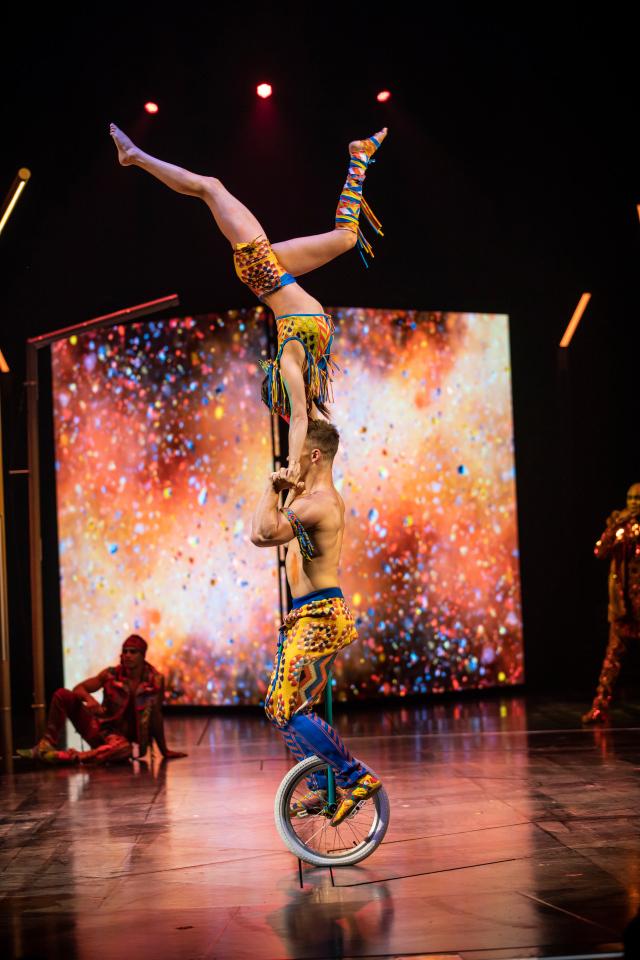 3. The music and comedy

As a violinist I really appreciated the musicality of VOLTA. Instead of a traditional ringmaster, VOLTA more of less had a singing narrator who kept the story going. Also, a fellow songstress with a gorgeous voice backed him up beautifully. When she broke out the electric violin everyone in the audience was mesmerized.. especially my daughter. 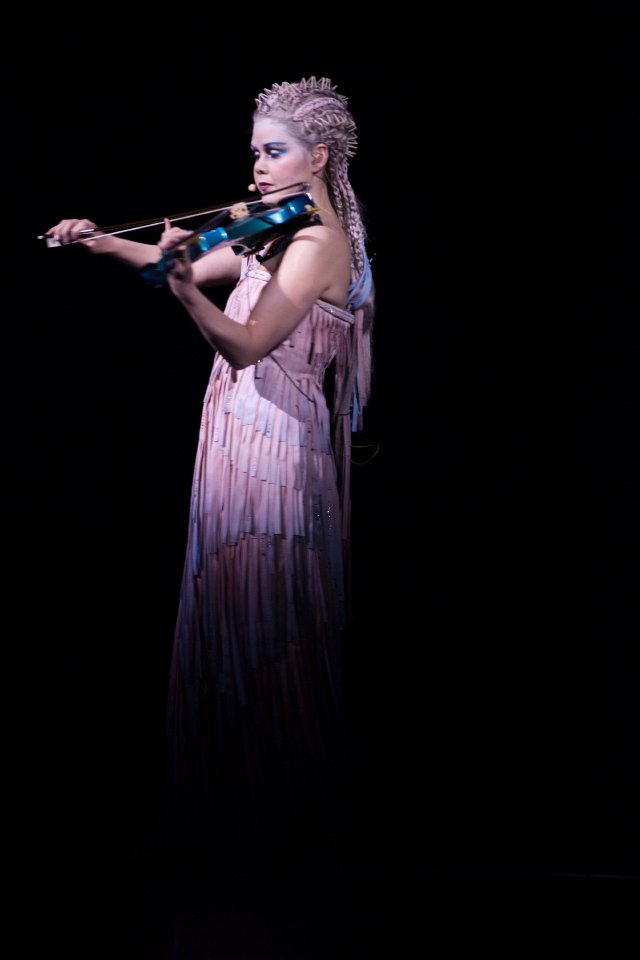 Another awesome feature of VOLTA was the comedic relief of ‘Mr. Wow.’ With his fake gold hair and fantastic instincts as a comedic mime, Mr. Wow had everyone cracking up with his antics.

4. The Feats of Aerial AWESOMENESS

VOLTA would not truly be a Cirque Du Soleil show without some sort of aerial acrobatics. I still can’t wrap my head around how the performers actually pull off some of their stunts. 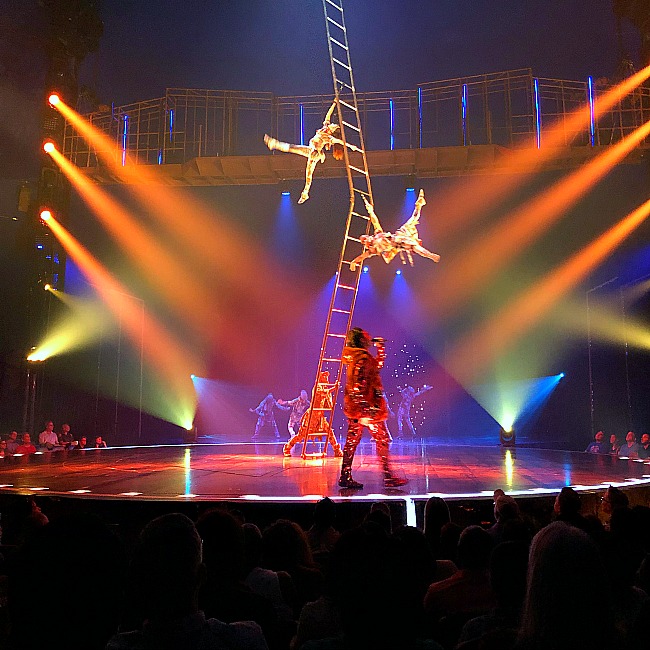 There was, of course, lots of spinning, death defying jumps and climbing, twirling a few hundred feet off the ground, and gracefully flying across the stage. 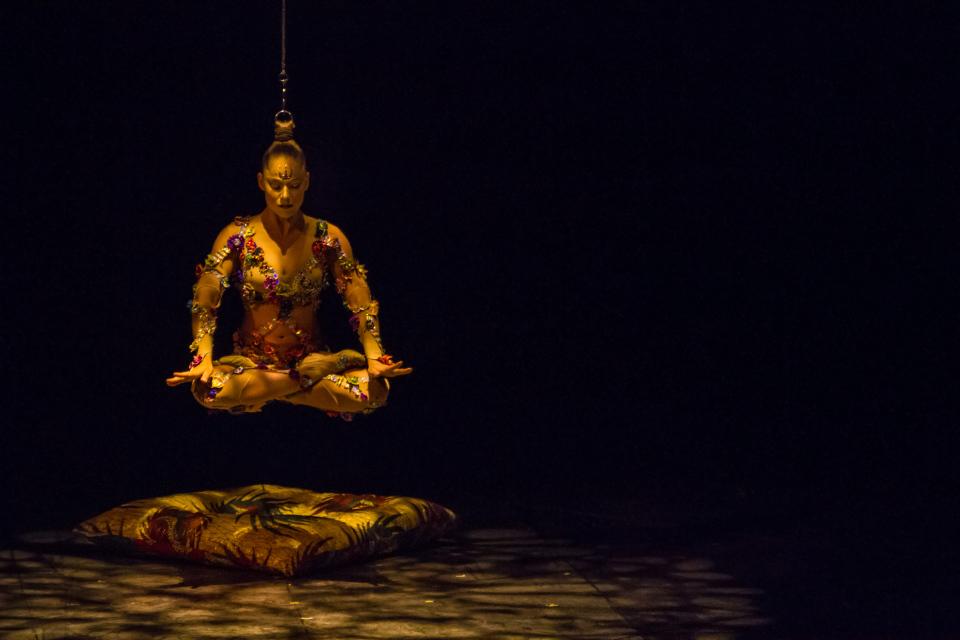 One of the biggest hits of VOLTA is when Brazilian artist Danila Bim is lifted high above the stage by only her hair bun. The best word to describe her act is breathtaking. 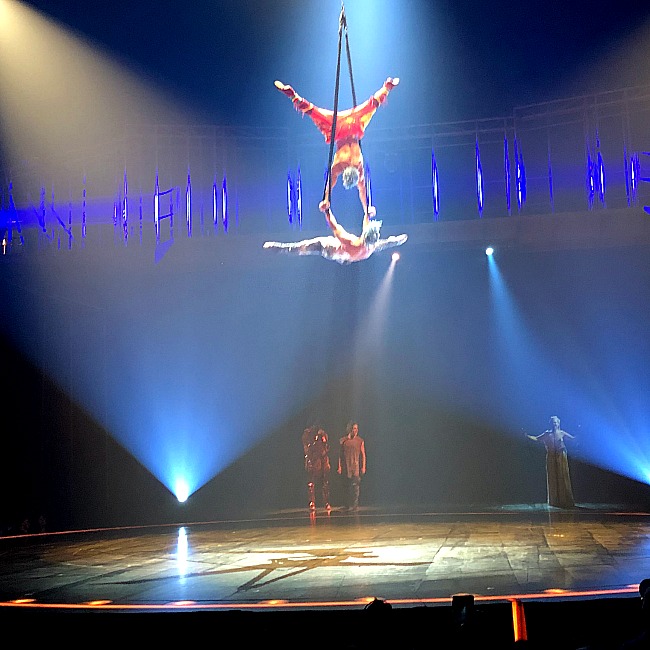 All the acts have fantastic aerial acrobatic treats you and your kids will love! 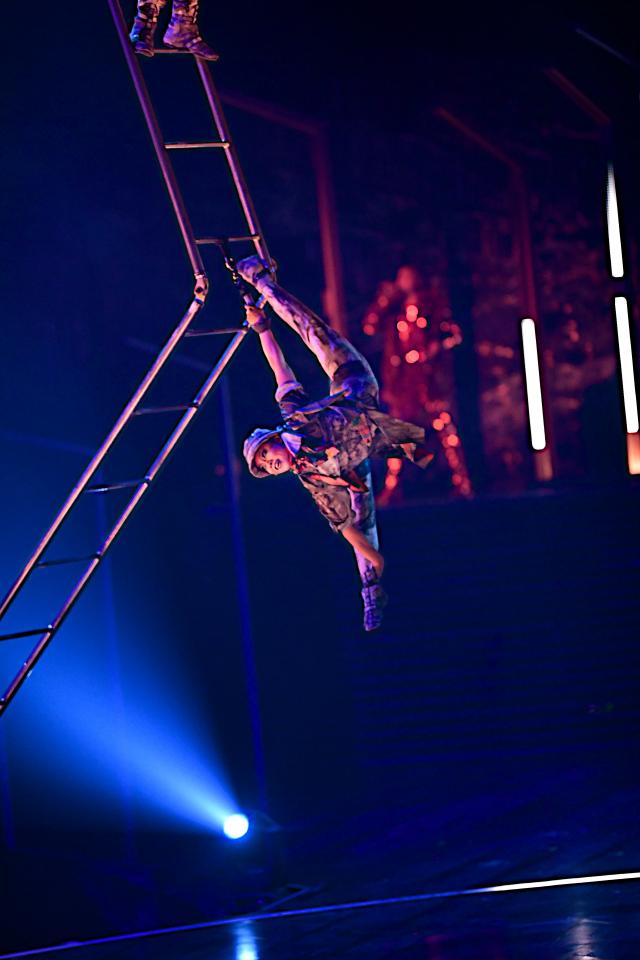 One of my favorite parts of VOLTA was the acrobatic trampowall. I think that is a made up word.. but what else do you call it? It seems like the acrobats are literally bouncing off the trampolines like ping pong balls, with each successive jump getting higher and more complex.

I could literally watch this act alone for an hour and not get bored. 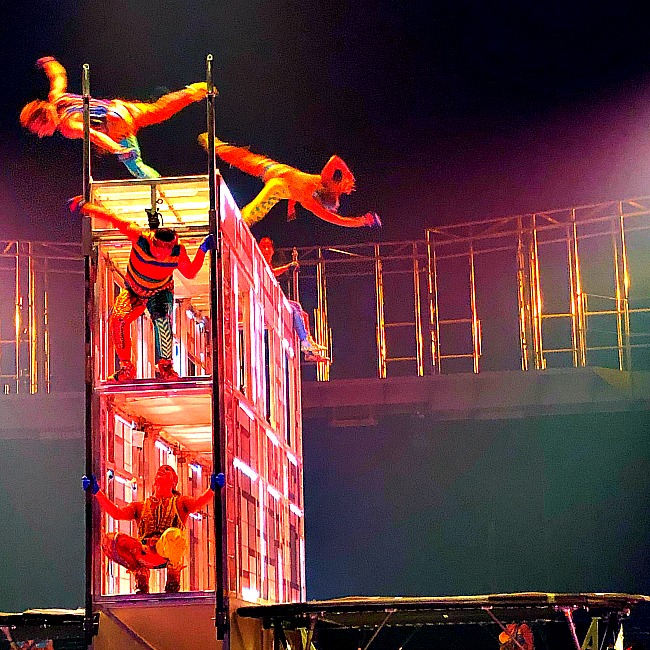 The Grand Finale of VOLTA was an amazing BMX Bike Acrobats. You may have seen them if you have watched America’s Got Talent or Canada’s Got Talent. These bike acrobats are AJ Anaya and Steven Moxley, who competed on those shows respectively. This part of the show has an amazing energy and it meant to symbolize Waz’s journey to full self acceptance and freedom.

It’s also just a lot of fun to watch! 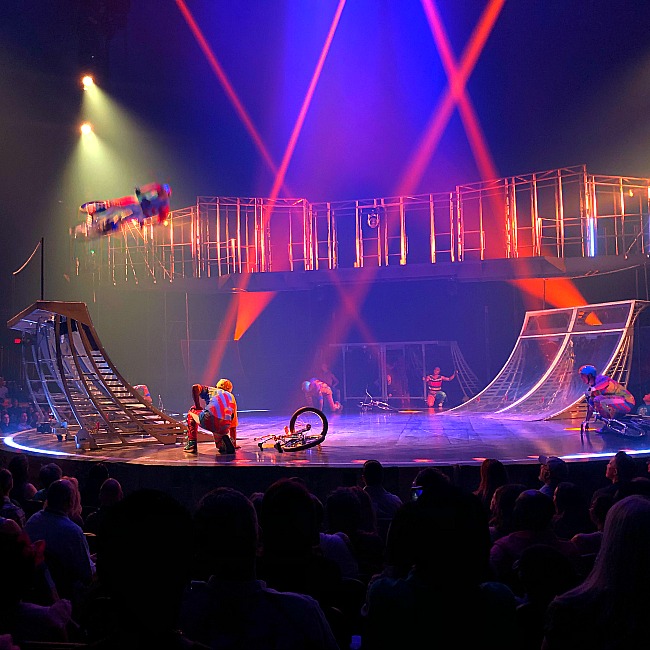 Yes! Absolutely! Take your kids! Just make sure they go potty before the show starts because if you have to leave in the middle of the show it will be a while before you can be let back in. The show lasts between 2-2 1/2 hours and there is a 25 minute intermission after about a hour. With the size of the big top and the number of port-a-potties available, that is more than enough time for a mid-show break as well.

One note on the port-a-potties that you will love (it’s the small things, isn’t it?). We saw VOLTA in Washington DC, so I don’t know if this is the case for all their shows (but I suspect it it).. these were the nicest port-a-potties I have ever seen. They actually flushed, they weren’t smelly, and you didn’t have to take a wet wipe bath after touching them. It was almost as if they weren’t really port-a-potties. I tell you that to ensure you that your kids can safely and easily go potty in them.

But seriously, the show is amazing and your kids will love it. It isn’t scary and the comedy of Mr. Wow will make them laugh.

Where to sit for Cirque Du Soleil VOLTA

As with many big top circuses, there really isn’t a bad seat in the house.

However, the devil is in the details.

For reference I have included a photo of the Big Top seating (I think the seating is the same for every show). The rectangle I drew is what I would call the zone of awesomeness. We sat in section 102 Row G Seats 3-5, which we decided were basically the perfect seats. You don’t want to really sit in the first 4 rows if you can avoid it because I am not sure you can see the entire stage from that angle. Plus, you would have to crank your neck back to see all the aerial stunts.

Further considerations: I have included the first 2 rows of the cheaper seats in the zone of awesomeness because the view there isn’t much different from the back two rows of the more expensive seats. BUT here is the caveat. I don’t believe the upgrade is super expensive but what you get is much nicer seats. The seats are wider, more comfy, much better leg room.. AND the seats come with a cup holder! How cool is that? I would definitely spring for the more expensive seats.

Consideration #2: For most of the show you will be super glad to have seats in the zone of awesomeness because that is basically center stage and most of the acts are oriented to give center stage the best view. However, if the BMX act is the absolute most important thing for you to see, you might want to consider a seat on the left or right of the zone. Why? Because the bike acrobats actually get some pretty serious air time. Because of that the circus erects a big (see through) plastic barrier on top of the bike ramp. That is basically erected right in front of the center stage seats.

You can still see the bike acrobats. But if you want a clear view of them (and the bike acrobats are the most important act for you), go with side-center seats, as opposed to seats that are full on center stage. 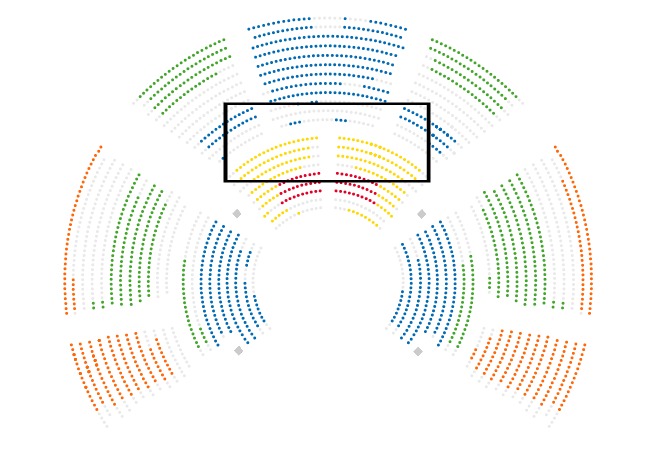 We absolutely loved VOLTA by Cirque Du Soleil and now I am wondering when the next circus will roll into town!

Important info about the show:

Pretty soon the weather is going to warm up and be

This playground doesn’t offer a ton of shade but

Can you even believe Easter is going to be here in

Pretty soon everything will start opening up again

There are loads of reasons why you would want to v

If you grab a scoop of delicious ice cream at the