Sometimes I wonder if Jesus shakes his head when he watches the behavior of his followers. I wonder if he cries, not just because there is sin in this world, but also because the very people who claim to be his ambassadors act so unlike him. It’s not that Christians don’t mean well. Most of the time we do. We just have this uncanny knack for focusing on the wrong things. Picking the wrong battles. Drawing the wrong lines in the sand.

What are the right questions to ask though?

If Jesus walked among us today, what would he focus on? What would Jesus see? In this week’s Women Encountering Jesus Bible Study Lesson Series, we will take a deeper look at the crippled woman who Jesus healed on the Sabbath. We will examine Jesus’ response to her (and to his detractors) for insights on how we should view a world in crisis.. and how that view could shape our actions. 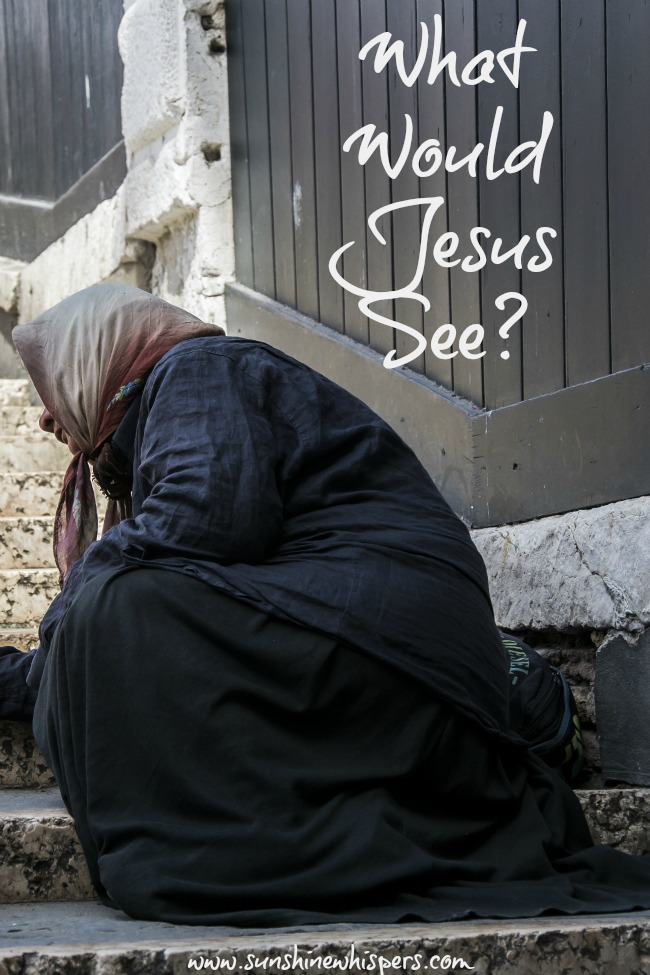 Jesus had a knack for ruffling feathers. Ever since he was 12 years old and gave his mother a heart attack by staying behind in Jerusalem to discuss the finer points of the law, Jesus had a habit of ‘going his own way.’ So, it is not surprising that when he started his ministry, the direction Jesus took his ministry ruffled the feathers of the religious establishment. Time and again throughout his ministry, the Pharisees and teachers of the law expected Jesus to act like them, but they were disappointed every. single. time.

Why is that? Do you think Jesus wanted to be contrarian or anti-establishment because it was cool? Wouldn’t it have been easier to just ‘go along’ and do what was expected of him? That would have been safe.

Jesus didn’t come to earth to give God-followers daily affirmations or cosmic warm fuzzies. Jesus came to this earth to seek and save the lost.

Jesus didn’t come to earth to perpetuate the old law, the way it had always been done. No, Jesus came to this earth to radically love sinners.

The ‘Danger’ of Radical Love

Jesus came to this earth to open our eyes.. and that, that is dangerous.

Radical love is not safe. It demands us to move beyond our comfort zone.

Faith is not safe. It demands us to surrender control to God, to trust in Him and focus on Him. It demands a kind of ‘faithful fatalism.’ That can be incredibly scary.

Seeing the world.. really seeing the world the way Jesus saw the world is not safe. It demands we put down the remote control, get off the couch , and actually do something.

It demands a love that is active.. that is sacrificial. When you love like that you can get hurt.

But he was deeply interested in saving us… and he constantly sought us out.

Jesus was in the business of looking for sinners to love and followers to save. 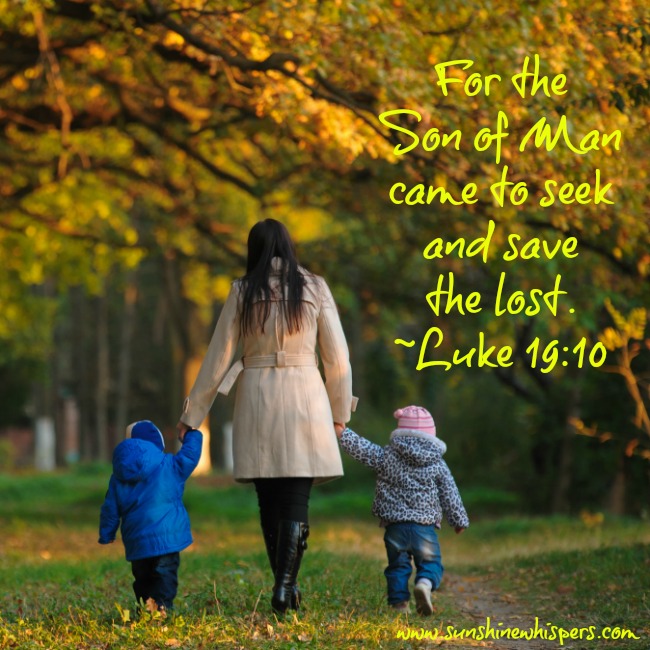 10 On a Sabbath Jesus was teaching in one of the synagogues, 11 and a woman was there who had been crippled by a spirit for eighteen years. She was bent over and could not straighten up at all. 12 When Jesus saw her, he called her forward and said to her, “Woman, you are set free from your infirmity.” 13 Then he put his hands on her, and immediately she straightened up and praised God. ~Luke 13: 10-13 (NIV)

One Sabbath, relatively early in Jesus’ ministry, he saw a woman who had been crippled for 18 years. Think about that for a minute. This woman had been bent over for almost two decades. For 18 years she had no relief… but Jesus saw her. Even though he was in the middle of teaching, when Jesus saw her, he called her forward and immediately healed her.

Jesus didn’t make her wait in line for relief. He didn’t make her sign a form. There is no indication that this woman was even paying attention to Jesus before he saw and healed her.

But there you have it. In the busyness of the synagogue, Jesus saw a need and he met it.

Even though Jesus himself was busy doing important work, he recognized a great need and he relieved it.

The crippled woman immediately straightened up and praised God. Fantastic, right? You would think the crowd would be overjoyed. This woman had been crippled for so long and now Jesus just performed a miracle to heal her. Praise God! Let’s have a party to celebrate!

Only, there was no party. There were only recriminations.

Instead of rejoicing, the synagogue leader criticized.

Instead of praising, the synagogue leader lectured.

Why would he act any differently? I mean, despite the fact that she had hung around the synagogue for more than 18 years, he probably didn’t even know who this woman was.

Do you ever wonder if Jesus shakes his head when he witnesses the behavior of his followers?

This synagogue leader was focused on the letter of the law. However, he completely missed the point of the spirit of the law.

He was so focused on getting ‘religion’ right, that he utterly failed at being ‘righteous.’

The ugly truth is that Christians can be downright ugly… all in the name of ‘God.’ 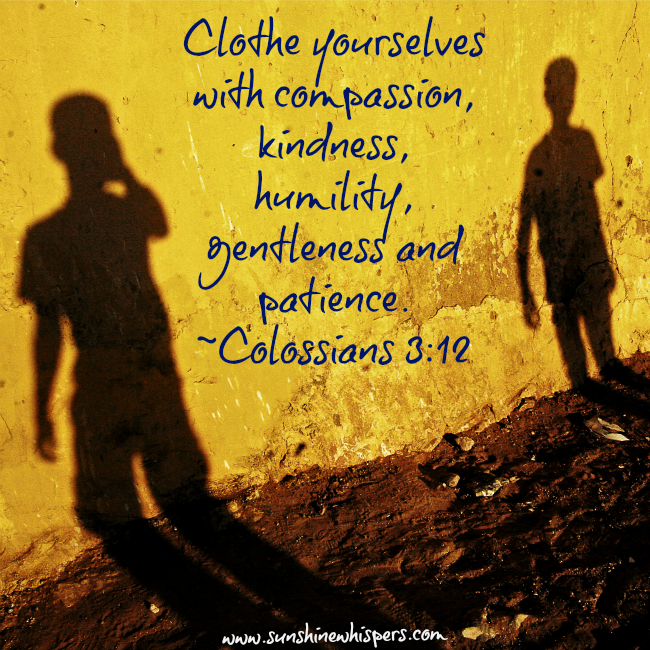 We judge. We gossip. We forget about compassion. We are mean.

So, what does Jesus see? How would Jesus view this complicated, fallen world in which we live?

Well, if we examine the example he provides with the crippled woman, I think there might be some clues:

See people in need and meet that need, even when it makes you uncomfortable. This is where faith moves out of the safe zone, right? But this is the type of radical love that softens hearts and opens minds.

It is the type of sacrificial love that Jesus demonstrated towards us. It is the kind of faith that he demands of us. 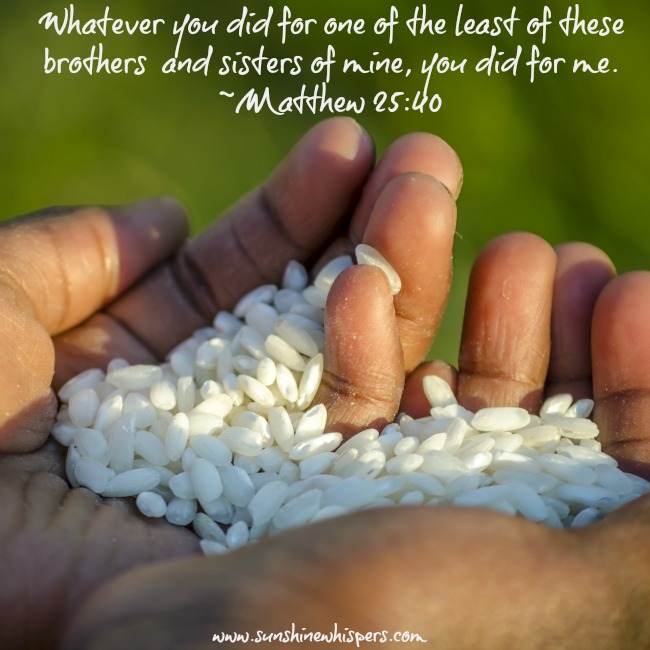 Jesus never said the cross would be easy to bear.. he just promised that he would bear it with us.

But first we have to open our eyes and see the world the way Jesus sees it.. with an attitude of love and compassion. With a view to seek and save the lost.

With an acknowledgement that we are all lost and we all need a Savior. We don’t need to be right, or to be comfortable, or to be safe.

Thank you for reading and God Bless!
Sara

Great tips on how we can see like Jesus, Sara! I think we should all have this list posted on our mirrors to read every morning. Thank you for sharing my post. I missed your wonderful link up last week from being out of town and unplugged. What a great surprise to return to!

A very humbling series of insights, Sara. As a christian, it is all too easy to lose the perspective that we must see as God sees, not as we selfishly want. I will try harder today to have God's vision through my eyes. Thanks so much for this essay. I can't wait to read your next one!