How to Answer the Most Common Questions Kids Have About Santa

Are your kids starting to question St. Nick? Here are easy answers to the most common questions kids have about Santa!

Santa is one of the most magical figures in a kid’s life. But with all that magic also comes a whole lot of questions.

While it may be tempting to use the go-to response – “He’s magic!” – those two simple words may not be enough for a curious little one. If your little one is starting to question Santa this holiday season, I want you to be prepared! Here’s how to answer some of the most common questions kids have about Santa.

Question: How does Santa watch every girl and boy around the world to make sure they’re being good?

Answer: He has the help of millions of elves. Elves are everywhere watching kids at home and when they’re out and about. Whether it’s your Elf on the shelf or ones hiding at the grocery store, they all report back to Santa at the North Pole before Christmas arrives. These elves help Santa keep his naughty and nice list up-to-date during the holiday season. But elves aren’t the only ones that help Santa know if you’ve been good all year. Parents, teachers, coaches, bus drivers, and babysitters all report back to Santa throughout the year, too. 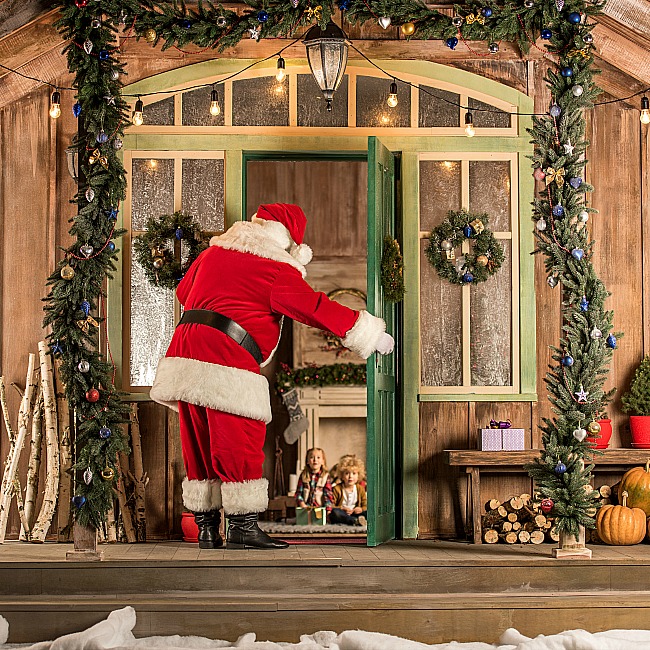 Question: How does Santa have time to deliver presents all around the world in one night?

Answer: Santa actually has more than 24 hours to deliver all his gifts. The Earth’s tilt and all the different time zones around the world means that Christmas morning arrives at different times across the earth. When kids are getting ready for bed on Christmas Eve in New York, children in China have already opened their presents. 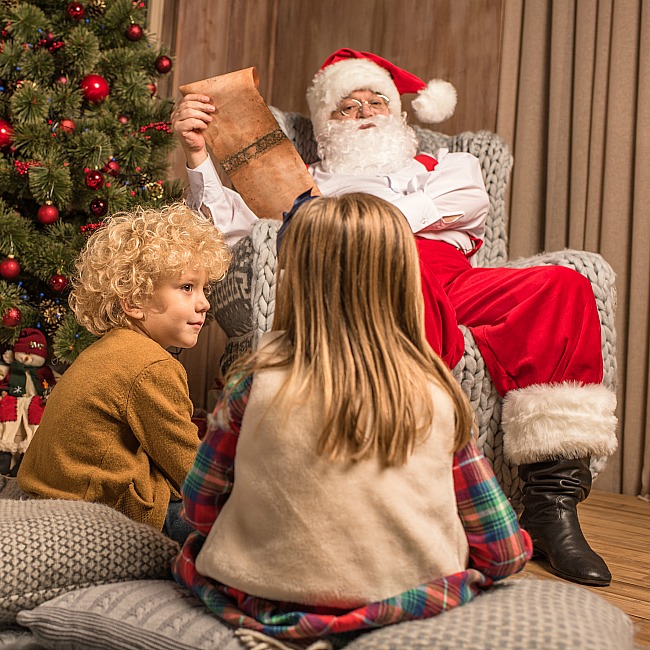 Question: How does Santa get into houses that don’t have a chimney?

Answer: While Santa’s preferred method of entry is through the chimney, a lot of homes don’t have one. When Santa can’t go through the chimney to get inside, he uses the front door. In fact, many families without chimneys leave a spare key out for Santa so he can get in a little bit easier.

Question: How does Santa fit down the chimney?

Answer: Santa’s big belly and his big bag of presents is obviously too big to fit down a chimney. But luckily, Santa is full of magic. One of his magic powers is to make each home’s chimney big enough for him to fit through. That way, he can easily slide down the chimney right into the house and climb back up to his reindeer when he’s finished putting the gifts under the tree.

Question: How does Santa carry all those presents in his bag?

Question: Why does Santa bring some kids lots of presents but other kids don’t get very many?

Answer: While Santa and his elves make all the presents at the North Pole, the kid’s parents pay for the presents Santa makes. Before Santa comes to everyone’s house on Christmas Eve, all the parents must pay their bill. Some parents have a bigger budget for Christmas gifts than others. 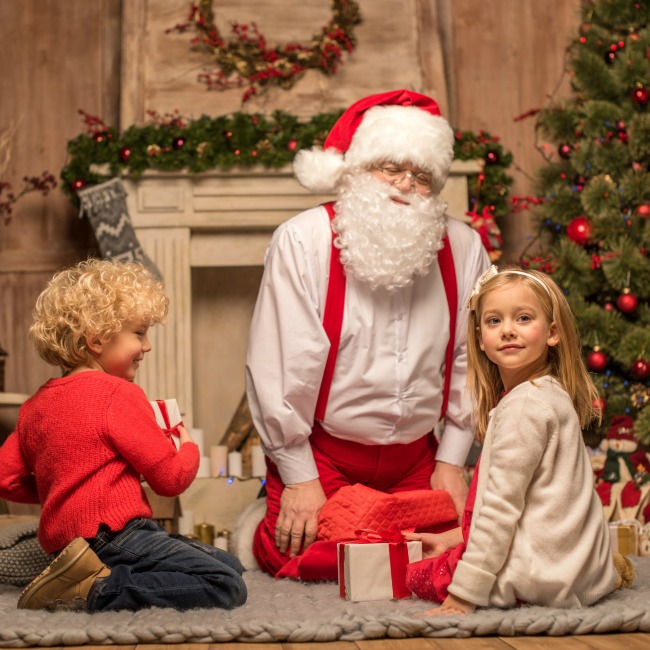 Question: Why didn’t Santa bring everything I asked for?

Answer: Sometimes, the presents you wanted weren’t in our budget this Christmas. And sometimes Santa takes a look at everything you already have and decides the things you need and the things you don’t. If Santa thinks you have enough toys, he gives some of the things on your list to kids who don’t have very many toys to make sure everyone gets a gift on Christmas morning.

Question: Why are there so many Santas out during Christmas? How do I know which is the real Santa?

Answer: The Santas you see out and about during the holidays are all Santas helpers. They’re here to keep track of all the kid’s gift lists and to let the real Santa know if you were good while you’re with me at the mall or with your Dad at Wal-Mart. The real Santa stays at the North Pole making his list and helping the elves prepare presents for Christmas. 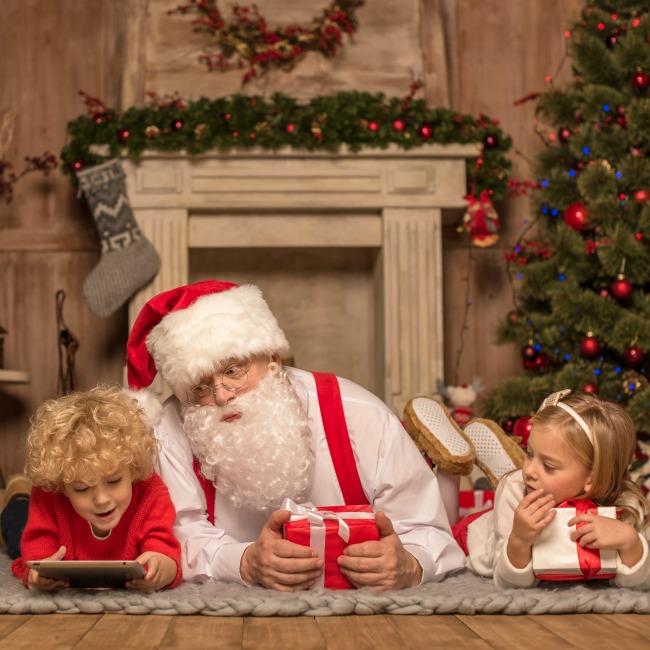 Question: Why does Santa have the same wrapping paper as you?

Answer: Sometimes, Santa’s elves run out of wrapping paper, so Santa has to use paper at our house. OR Mommy gives Santa special wrapping paper to use just for you. That way, he knows exactly which presents in his bag belong to you.

Question: Why did my friend get a note (or video, letter, special wrapping paper, phone call, etc.) from Santa and I didn’t?

Answer: Santa does different things for different kids to make them feel special. If you would like Santa to do something special for you, tell your parents or your Elf. You may just see a special surprise waiting for you on Christmas morning!

Question: My friend said that Santa isn’t real? Is that true?

Answer: Come clean and tell the truth OR tell your little one that Santa Claus is real and needs their help convincing nonbelievers that Santa exists. 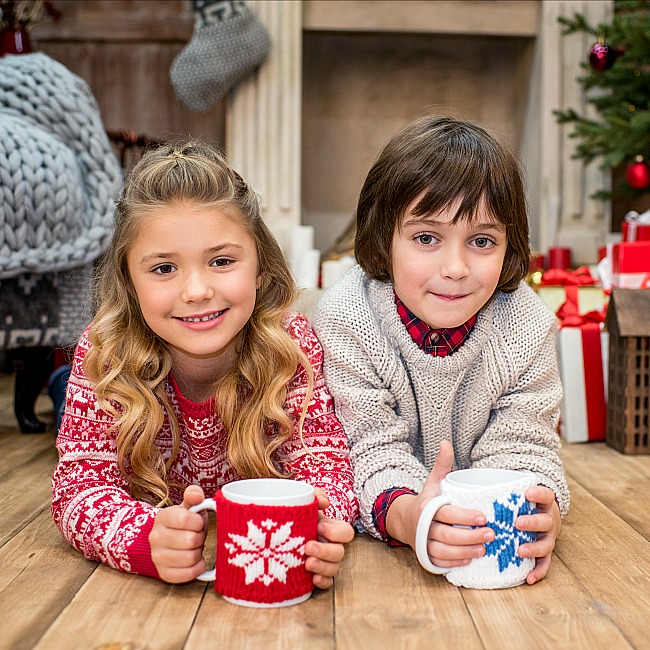 check out these fun Ideas too!