When I think back to the reasons why I enlisted in the U.S. Army, patriotism and public service probably didn’t even make it on the list. It’s not that I wasn’t patriotic… I knew the words to the ‘Star Spangled Banner.’ I enjoyed a good barbecue and fireworks on the 4th of July as much as the next person.

Perhaps I was just naive, sheltered. I did not grow up near a major military base so my entire childhood was devoid of the military culture apart from the John Wayne movies my Dad insisted on watching.

In hindsight, I realize now that my version of patriotism was the easy kind.. you know, the kind where you enjoy all the perks of living in an amazing country, but have never had to give anything up to live there.

Let me be clear, there is absolutely nothing wrong with that.

Anyone who has ever served in the military would tell you that part of the reason they serve is so that most Americans never have to sacrifice. 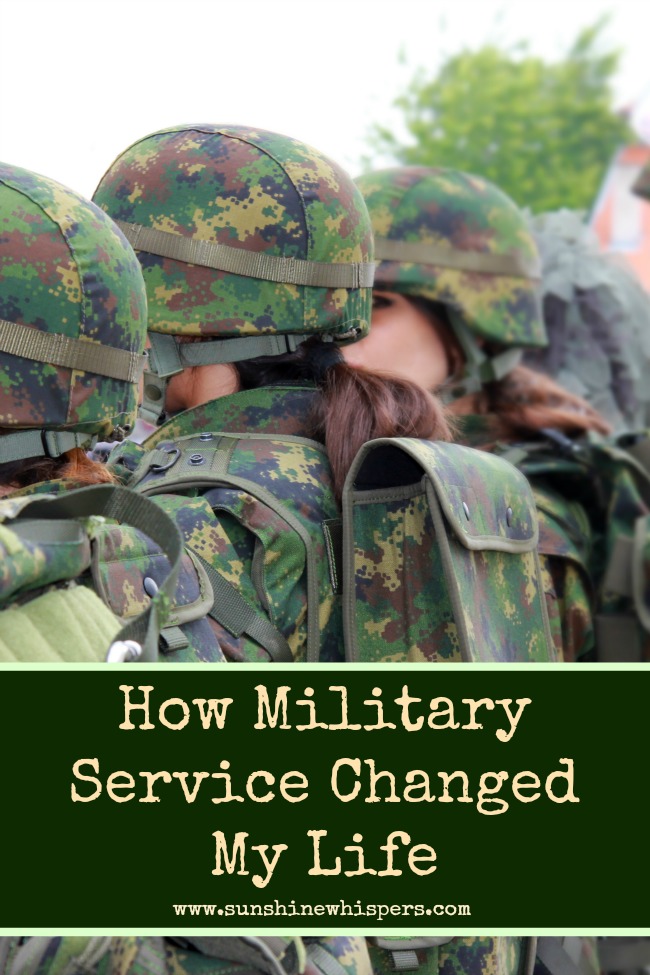 How Military Service Changed My Life: A Veteran’s Day Reflection

Anyone who knows me would tell you that I am not what you would picture when you think of a Soldier. I served for 9 years and the entire time I felt like a kindergarten teacher trapped in combat boots and camouflage. I tried hard and was absolutely ferocious when needed, but I never fully assimilated to the military mindset. However, there are a number of things that made an indelible impression on my life and continue to impact me now:

1. I discovered a much deeper ‘patriotism’ through military service.

Maybe patriotism isn’t even the most accurate phrase.. let’s call it an ‘appreciation.’ I learned a deep appreciation for the men and women who sacrificed throughout our nation’s history in order to protect America’s interests, protect the notion of a free society, and– when necessary– facilitate a more complete realization of the social contract.

As a student of history, I knew the details of major battles, major personalities, and events. It was the countless stories of valor and bravery though that really made an impact on my life. What kind of selflessness; what amount of duty and loyalty would cause so many people to endure such hardship and then still have the courage to gut it out and fight the truly terrifying battles in order to promote the greater good?

It is nearly impossible to read the stories of Medal of Honor winners and not be inspired to live a better life. The thing is, there are so many people who lived with that kind of honor on a daily basis, but were never recognized. I worked and lived alongside many of them for 9 years.

2. You don’t always get what you want.

Ok, in fairness, any parent would tell you that they live this maxim every. single. day. However, serving in the military necessarily means that your freedom is literally squashed in the name of accomplishing the mission, improving morale, or instilling military order and discipline. I can’t even begin to count the number of times I was forced.

Forced to cut short my 1-year wedding anniversary celebration to go pee in a cup at 4AM. Forced to stand at parade rest and defer to a person I had zero respect for. (Point of clarification– this did not happen very often. However, not every person in authority over you in the military is nice or has good intentions… or is worthy of respect. It didn’t matter though. You had to respect the rank, even if you did not respect the person.) Forced to work 14 hours straight and then complete a physical fitness test.

I know of a friend whose unit was forced to spent about 2 weeks ‘camping out’ in the motor pool after a 6-month deployment to Iraq, because someone had misplaced a set of Night Vision Goggles.Forced.

Does that stink? Oh, yeah… absolutely it does! However, when you are in that sort of situation for an extended period of time, you develop a strong internal resiliency. I realized after I had left the military, that I was incredibly resilient.

I was resilient in very stressful and horrible situations that should have probably broken me. I know my faith in God sustained me during those times. However, I know that the ability to withstand the suck was also strengthened through the hardship of military service.

3. Almost everything makes a great story in retrospect.

So, if there is a silver lining to the hardship of military life, it would be that the best stories seem to be born of the hardest tests.

How about that one where I was in a training class and in order to prove to my male counterparts that I wasn’t a princess, agreed to carry a radio that weighed an additional 40 lbs. on my back during an exercise, until I literally could not move anymore? Great story.

How about the one where I had to work an overnight shift on Christmas Eve and the officer in charge brought in an entire roasted pig, head an all, for a Christmas feast? Awesome story.

How about that time when our unit did a Battalion run through German vineyards, and it was so muddy that the run was more like a slip ‘n slide? Yep.. only in the military do you collect great stories like that. And wow, there are so many fantastic stories to tell.

4. Personal growth is possible, but you may have to work hard to attain it.

When I enlisted in the military I could barely do two pushups and hadn’t run more than a mile since I played soccer in high school. One year later, almost to the day, I was able to do 50 pushups in 2 minutes and run 2 miles in 15  minutes flat. I went from being a couch potato to an athlete in less than a year.

You see, the military is all about testing yourself and pushing your limits.

Learning to drive a military vehicle? How about doing it at night up the side of a mountain without the lights on? Want to learn a language? How about studying some of the most difficult languages for English speakers to learn?

Think you can’t shoot straight? How about qualifying to shoot an M-16 in the pouring rain?

There are many challenges you will face in life, but with hard work and the proper mindset, you can successfully conquer many of them. My time in the military drove this point home on almost a daily basis.

5. There are all kinds of people in this world and most of them can add value to your life.

I know the stereotype of the military is that Soldiers are a monolithic mass of testosterone and true grit. However, I learned the true meaning of diversity, teamwork, and the value of cultivating positive relationships with people outside my comfort zone in every unit I served in.

Again, I am sure I was sheltered as a kid… but that was not the case in the military. My fellow Soldiers came from every subset of America: suburban/urban/rural, racially diverse in every sense of the word, religious practices I had never even heard of, political leanings, lifestyle leanings, and everything in between.

This constantly challenged my worldview and tested my adopted values in a way that allowed me to accept that there are usually multiple valid choices in life, and diversity only strengthens the team. Learning how to get along with a wide variety of people has only enriched my life.

6. I will now and forever only use black pens.

Seriously, the use of blue ink in the Army was verboten. For 9 years, to the best of my knowledge, I never used anything but a black ink pen. Now, every once in a while a blue pen will sneak in. When it does I feel strange… and then run and get a black pen.

There are many other ways in which the military changed my life for the better. On this Veteran’s Day though… these are a few of the ones which have made a lasting impression on this veteran.

Love love love your perspective and sharing your story with us. Thank you!

Thank you for your service.

Thanks for this great tribute. It is inspiring to discover what we can do when we push our limits.

I love this, Sara! Diversity, testing your limits, becoming resilient. That time the cockroach disrupted an "open ranks" inspection and we couldn't move (or laugh)... But I went the opposite route on the pens...I try to use every other color of pen!! :)