Inside: When traditional tactics for stopping potty talk don’t work, this one question might be the one thing that will get your preschooler to stop it for good!

One day, in the not too distant past, as I walked down the hallway to my 4-year old’s preschool classroom, I prayed she had had a ‘good’ day.

No hitting or spitting.

I opened the door to the classroom and saw her sitting with her friends, drawing hearts and rainbows on white construction paper. Ok, so far so good.

Then I saw it. A pink slip of paper fastened by a paper clip to her cubby bucket.

A sense of doom filled my chest. What did she do now?

I tentatively approached her teacher and asked about the incident report. Our daughter’s teacher tried to furrow her brow, but after about 5 seconds, her cheeks flushed a little and she started giggling.

What did our little spitfire do this time? 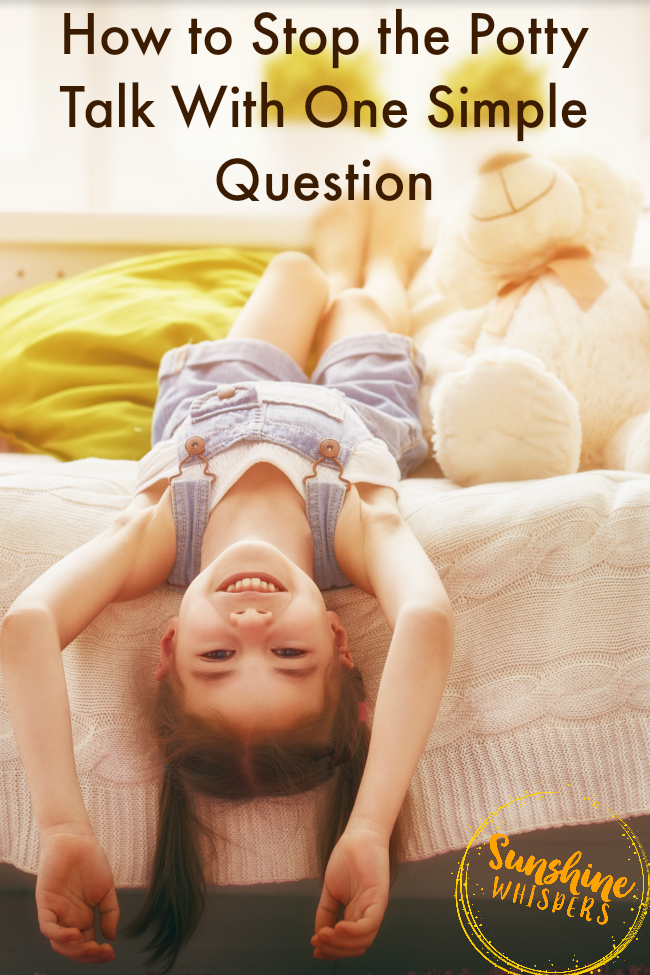 You see, when our daughter was born, my husband and I made a command decision: We would not be skittish about talking to our little girl about her body parts and bodily functions.

We reasoned that if something horrible ever happened to her, we wanted her to be able to use the right words to talk about it. We thought that by reading Everybody Poops, she wouldn’t be afraid to, you know… go poop.

It never occurred to us that these choices would give birth to such embarrassing unintended consequences. How could we imagine that when our sweet, purple and pink loving, skirts and dresses only wearing, princess turned 4 years old, she would unleash a torrent of preschool potty talk that would make even a 13 year old boy blush.

Our daughter had become a potty talking hooligan.

For months we tried every trick in the parenting handbook to get her to stop:

It turns out that when kids are in the ‘potty talk’ phase, it is very hard to snap them out of it without resorting to drastic (and not really acceptable) measures.

Why It’s So Hard to Stop Potty Talk

Because of a concept called behavior reinforcement.

Let’s say your 3-year old can’t stop calling your dog a poopy-head (not that I would know anything about that). If you, as the parent, laugh at that crude joke even once, your child gets the message that yep– I am funny. I am really funny when I call the dog a poopy-head. Hey, maybe I should call everyone a poopy-head. That’s funny!

Even if you never laugh at that phrase again (and let’s be honest.. How many parents never laugh at the phrase?), it would take a ridiculous amount of time before your preschooler gave up because the joke wasn’t funny anymore.

In the meantime, they try the joke out to everyone they know. Preschool teachers are wise to that game and you can generally count on them to be your ally in the fight against potty mouth.

But the teachers are not the problem here. Think about all your child’s friends. Every time a potty word is spoken, at least someone else will laugh.. And then likely repeat it. 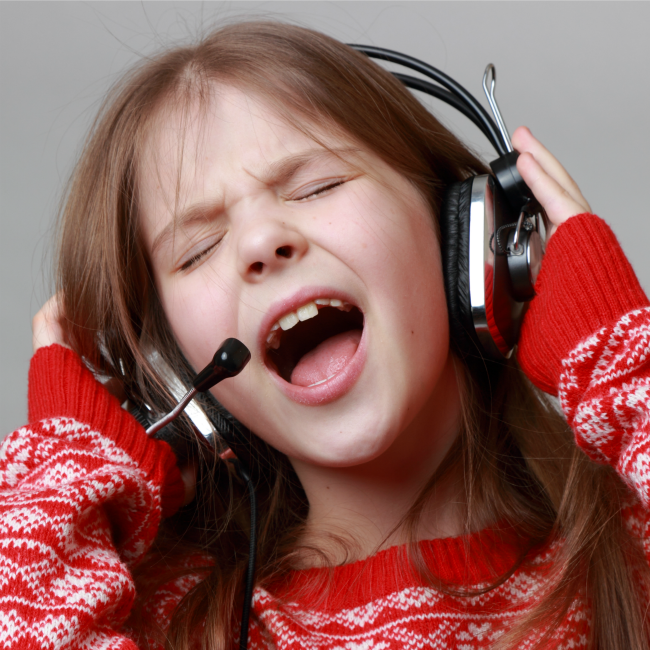 Many parenting experts start with strategies to deny your preschooler a reaction to potty talk.

You got this. You are Spock. Channel your inner Spock.

Only you can’t control everyone else’s reactions.

So, parenting experts say to use positive behavior rewards. Catch your child being good. Use a sticker chart.  Yeah, that so doesn’t work with a 4-year old who is determined to get a laugh from her friends.

What about using empathy? You can ask your 4-year old how they would feel if someone called them a poopy-head. (they probably don’t know if they would feel anything about that)

What about distracting them with a game that doesn’t involve potty talk? Yeah– tried it. That works for the moment.. But it isn’t a long term strategy for success.

You could tell your 4-year old that potty talk only happens in the potty. Sure– then they would go into the bathroom and scream potty words because that is a place they are allowed to say them (ask me how I know).

Potty Word Perpetrators are serious about their game

Once a preschooler is entrenched in the cycle of using potty words a lot, typically the only way that will stop is:

The potty talk in our house had reached critical mass and my husband and I were completely at a loss for how to make it stop. We had tried everything and nothing worked.

Then we had a breakthrough, and it was HUGE. 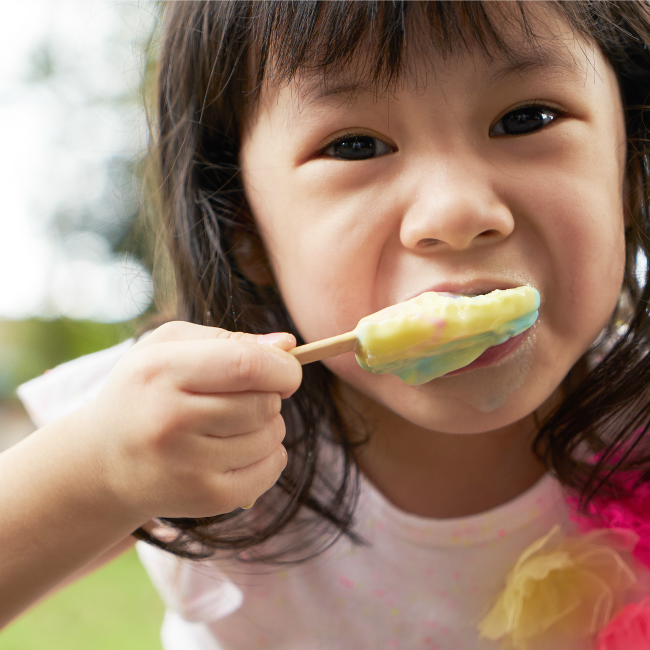 The Diva of Poo? Please, make it stop.

My daughter and I were on our way to an Easter egg hunt at a local petting farm. I know she was excited about this because she kept asking me how many pieces of candy she could eat.

We had just gotten on the road and she started singing very loudly. Normally I don’t mind.. If I know the song she is singing I will join in too.

Not that day though. Nope. The song she chose was Let it Go from the movie Frozen. Only, instead of channeling her inner Elsa and singing about preschool empowerment, she replaced the words of the song with poop. As in:

So, I interrupted the Ode to defecating and told her, point blank–

Sweet things can’t go in mouths that dirty things come out of. If you say one more potty word.. At all… you will not get to eat a single piece of candy today.

Then for good measure I added:

And don’t test me on this. If you say even one more potty word, that is it. No candy at all today. None. Zip. Zero.

And then I waited. I could see her thinking about it. Weighing the choice between being the queen of the poop ballad and getting to enjoy the spoils of the upcoming candy hunt.

About a minute later she started singing a different song.

And it had nothing to do with poop.

Would you believe me if I told you she pulled herself together and did not say a single potty word for the rest of the day?

I was floored. It worked!

Not only that, since that fateful morning, we have used this tactic numerous other times and it has worked… every. Single. Time.

Why does it work?

But if you keep using this trick, I can confidently say they would likely not make the wrong choice the next time.

And before you know it, they will get a little older, and the allure of the potty word will be replaced by the next parenting challenge.

But this works. This really really does work. Halleluiah!!!

I was searching around in the middle of the night for an idea to stop the endless potty talk. Constant strings of “toilet, poop, fart, diaper.” I hung on to every word of this. It resonated with me. I was excited to try it in the morning. It’s worked! For 3 days, no potty talk. His teachers & I are so thrilled. Potty talk is contagious. Thank you!

That is an inspired idea!

Wow. Awesome! Thank you for your comment Becky! You just made my evening! :)