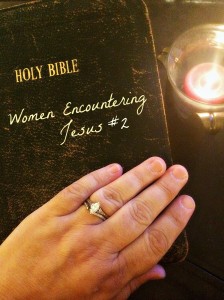 For over 2,000 years, Christians worldwide have revered and honored Jesus’ mother Mary. Statues have been carved, paintings painted, icons— worshipped. However, when this young woman, perhaps even still a teenager, was called to serve, no one honored her, there were no paintings, no statues, no icons. If you stop and think about the situation Mary faced for even a minute, it will become clear that the first woman Jesus encountered, his own Mom, is an amazing example of faith and obedience to the will of God, even when it makes no sense.

Jesus’ first encounter with a woman also sets the stage for his entire ministry and is a powerful testament to the notion that God can use anyone to accomplish His goals, His mission… as long as we are willing to serve.

18 This is how Jesus the Messiah was born. His mother, Mary, was engaged to be married to Joseph. But before the marriage took place, while she was still a virgin, she became pregnant through the power of the Holy Spirit. 19 Joseph, her fiancé, was a good man and did not want to disgrace her publicly, so he decided to break the engagementquietly. (NLT)

In Jewish culture at that time, there were three steps in the marriage process. First, the two families agreed on the union. Second, a public announcement was made. At this point the couple was considered engaged and the only way the relationship could legally end was through death or divorce. The third step in the process was the actual wedding ceremony. It was after this that the couple could live together, and you know.. do all the ‘stuff’ married couples do.

So, if Mary turns up pregnant, that is a big problem, right?

Notice verse 19 where the Bible says that Joseph was a good man? The New International Version actually says Joseph was a ‘righteous’ man. He was a zealous keeper of the law. According to the Old Testament law, that meant Joseph was legally fully within his rights to have Mary judged publicly and stoned to death (yikes!). He could have rejected her and in so doing put enormous pressure on Mary’s family to disown her— which would have led to a life of begging and probably prostitution. Joseph could have been nice– kind actually, and decided only to quietly divorce her. He did none of those things though because God intervened. Forget about Joseph though… what about Mary?

Regardless of what Joseph did or did not do, you have got to believe that Mary’s decision to accept God’s call to serve– to give birth as a virgin, was truly a difficult one. It is not like they lived in a thriving metropolis. Small town, big mouths, right? Even though Joseph married her, Mary would have surely endured the pain of ridicule. Everyone in her town would have known she was pregnant before the wedding. Surely there would be a social stigma that would always follow Mary:

Mary’s reaction to all of this was simply amazing. Mary submitted to God’s will for her life. Mary believed! Mary had faith! Think about this for a second. This was hard for Mary. In Luke 1:29 we get a glimpse of Mary’s reaction:

29 Confused and disturbed, Mary tried to think what the angel could mean.

Personally, I think it is amazing that God chose Mary because it illustrates that God can use you for great works of service… if you only trust Him and accept His call.

So, what is holding you back? Are you ready? Let’s serve!