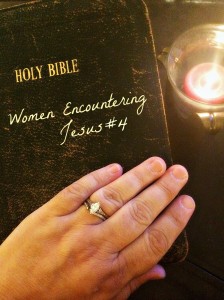 Moms have an enormous influence on their kids. There is no reason to believe that Mary and Jesus were the exception. The Bible does not give a lot of details about Jesus’ childhood but we know that he did have a childhood. Imagine what that must have been like for Mary.

Hebrews 2:14 clearly states that ‘Jesus also became flesh and blood by being born in human form.’ Verse 18 adds, ‘Since he himself has gone through suffering and temptation, he is able to help us when we are being tempted.’

If Jesus was fully human, it is only reasonable to expect that he progressed through all the stages of childhood, much like our kids do. At some point Jesus became aware of who he was, but that does not mean he was a perfect child, right? You have to wonder what it was like for Mary to change his diapers, clean up his spilled milk, calm his temper tantrums, soothe him when he was sick.

Mary was called to be Jesus’ Mommy, just like I am called to be a mother to my daughter. It is, in many ways, my most important calling. Because Mary was Jesus’ mother, she loved him, protected him, and trained him all throughout his childhood. There were many women God could have chosen to raise His son but He chose Mary. I would like to think it is because He knew Mary would train Jesus the kid to be the man God wanted Jesus to become.

Eventually, Jesus did become a man. Luke 2:52 says that Jesus ‘grew in wisdom and stature, and in favor with God and men.’ Throughout Jesus’ ministry, Mary was still his Mom. At the wedding feast in Cana, she trusted that Jesus would do right by the groom and his family. As Jesus’ ministry progressed, there is evidence that Mary might have worried that Jesus was a religious zealot. Mary did not want to see her first born ridiculed; the object of scorn. No Mom does. However, eventually Mary made peace with the fact that Jesus was also the Son of God, and she let go.

At Jesus’ crucifixion, Mary bore witness. In John 19:25-27, we see a son in agony on the cross, but still concerned about the well-being of his mother. After Jesus’ death and resurrection, Mary bore witness. In Act 1: 14 we learn that Mary was even present at the Ascension. Mary, Jesus’ Mom let go of her son and then was transformed into a worshipper of her son as the Son of God. As a Christian mother, my calling is to love my daughter and train her to become a faithful child of God. Mary’s calling was to love her son and train him to become the Son of God. Then it was Mary who became the faithful follower. That is amazing!

How do you influence your children to become children of God? How are you transformed into a follower of God through your role as a Mother?

For the complete downloadable Woman’s Bible Study Guide for this lesson, see:

[…] The Servant Heart of a Woman Bound by Demons, then Freed by Jesus! The Woman Who Impressed God Mary Lets Go Being the Mommy of Baby Jesus Are You Ready to Serve? What Does God Really Think About […]