Recently we took our two boys (15 and 7) to see Monster Jam Triple Threat at the Royal Farms Arena in Baltimore. I don’t know why we never brought them before, but clearly, that was a big mistake because they absolutely loved it!

The whole ride home my 7 year old was talking about how “EPIC” it was, and would we PLEASE buy him a Megalodon toy when we got home, and “when can we go there again?”

At church on Sunday, he brought his toy truck with him and told everyone who would listen how EPIC Monster Jam was. Even my 15 year old was enthusiastic and said he enjoyed it a lot, and participated in conversations about his favorite truck/driver, which for him was Max D. It was a great family outing for us! 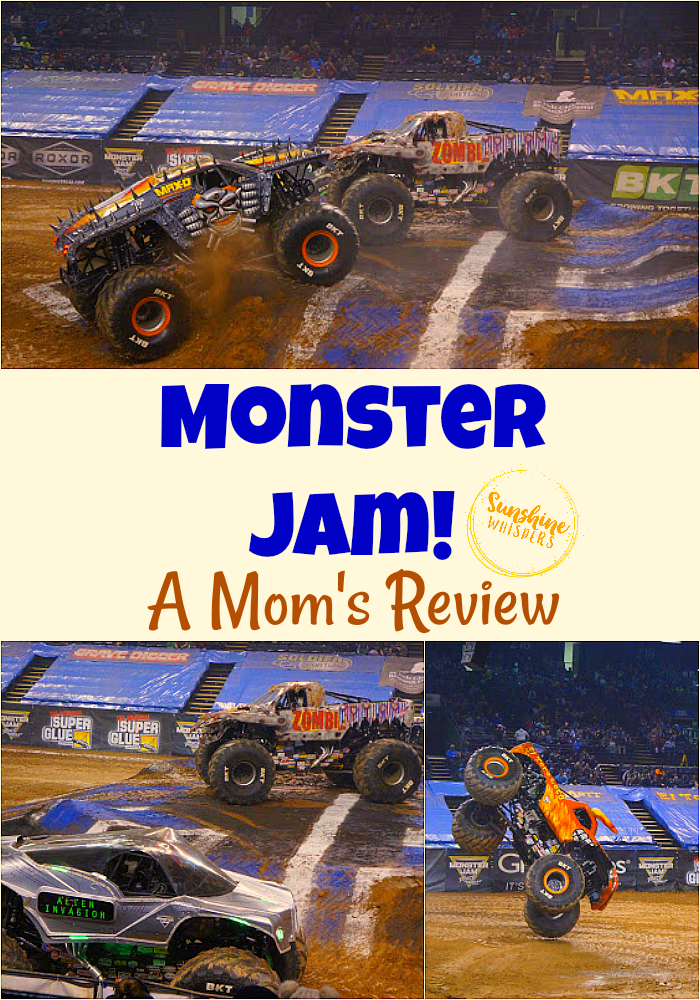 Tips to Maximize Your fun at Monster Jam

Since I had never been to Monster Jam before, I did Google it just to get some basic information, like, how long did a show last (about 2 to 2.5 hours), etc. And I am glad I did, because turns out, there are some important things to know before you go!

You MUST have hearing protection, ESPECIALLY for your kids. We did not know that, but when I googled, and learned about it, I also saw that most venues sold hearing protection onsite. Since I only googled a few hours before we went, that’s what we ended up doing. 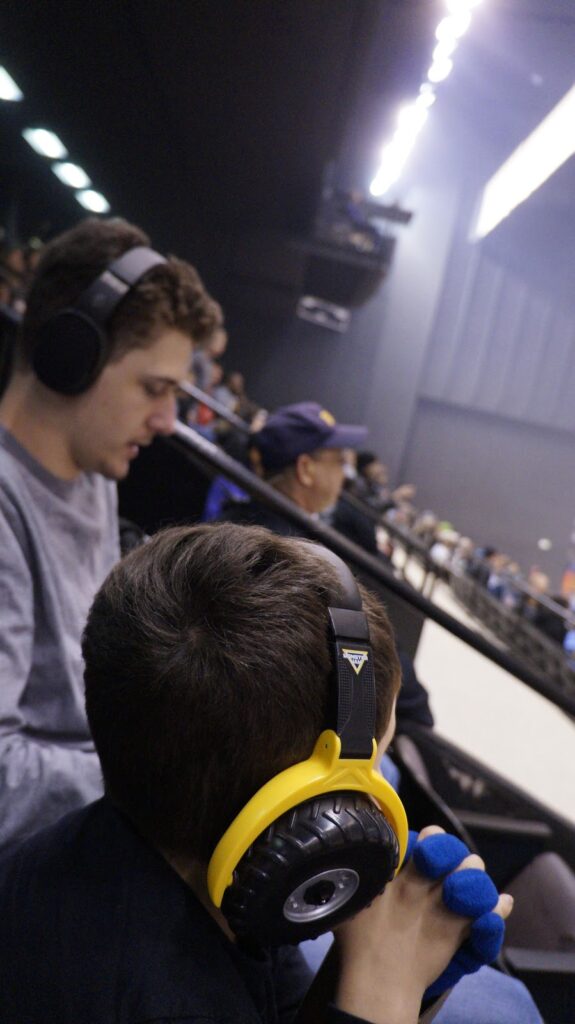 They had noise cancelling headphones and regular foam ear plugs for sale. The headphones were $20 for basic ones, and up to $30 for ones that looked like tires and had flashing lights. The ear plugs were $4.50 a package. I’m not sure if they cost the same at every venue, but that’s what we paid in Baltimore.

Of course, the 7 yr. Old HAD to have the ones with lights on them. Luckily for us, the teenager always has his (noise cancelling) headphones on him. I used the foam plugs and they worked fine. As soon as the trucks came out, I was SO. GLAD. I bought protection. Those trucks are heart pounding loud!

Monster Jam keeps it chilly/cold in the arena so that the trucks do not overheat. I’m glad I knew that ahead of time too! I’m one of those people who will wear fewer layers if I know I’m going to an indoor event, simply because I’m lazy and I don’t want to carry around all that extra stuff I don’t need!

Now, I had read someone’s review and they said it was “FREEZING” so I made sure we all had coats, hats, gloves, etc. Once we sat down however, I realized it wasn’t as bad as all that… It was chilly, but I had on a thick sweater, and found it quite comfortable. Later on in the show, it did start to get quite cold, so I put my coat on, and was still comfortable. So, I wouldn’t go in wearing a T-shirt or something without having a sweater or coat to put on. Layer up!

The fumes get REALLY strong as the show goes on. Now, I don’t think it would have bothered me, except for the fact that I am 27 weeks pregnant, and I did wonder if breathing in all that stuff was bad for the baby.

I spent a lot of time with my husband’s fleece hoodie over my mouth and nose. At the intermission, I walked in the hallway to get some fresh air. The fumes did not seem to bother the kids, or my husband, but if you are sensitive to that kind of thing, bring something to put over your face. 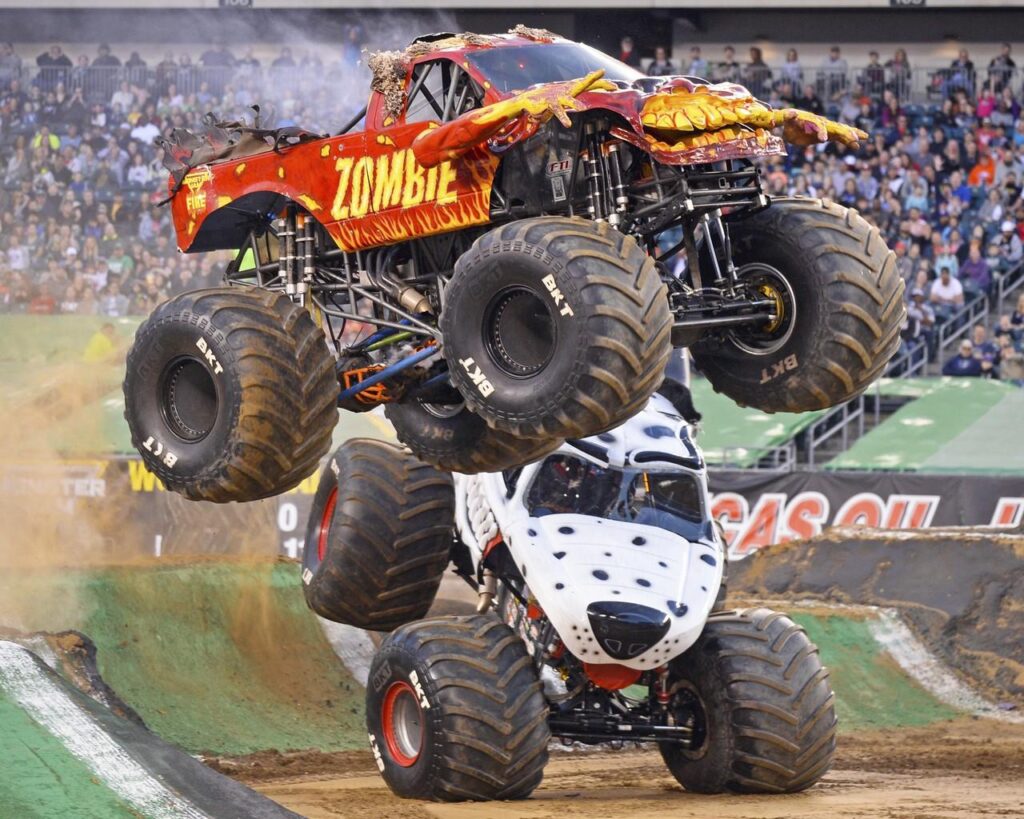 Those are the three main things that I think are important to know for your trip to see Monster Jam. I also noted that at the beginning of the event, they told you about an app you could download on your phone, to help judge the drivers and vote for your favorite(s) during each event. My 15 year old really liked that option and enjoyed rating each performance. He really got into it.

So, what did we think?

I have to say, I was surprised at how much I enjoyed the show! Those trucks are just massive!! To see something so massive stand up on one wheel, fly through the air, and even do a backflip was just… WOW. Until you see it up close and in person, you just don’t fully grasp how cool it is. 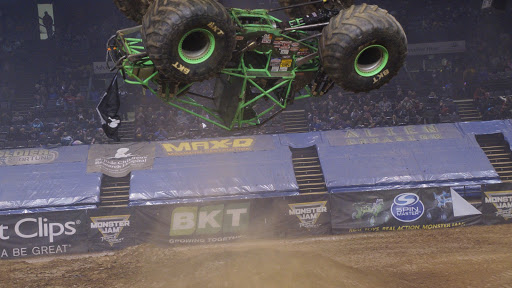 It was also very family friendly, absolutely NO questionable speech or actions by anyone. The music they played in the background was current and hip, but they didn’t play anything with curse words or “adult” lyrics, which I appreciated. It was truly a great family event and I definitely recommend it! 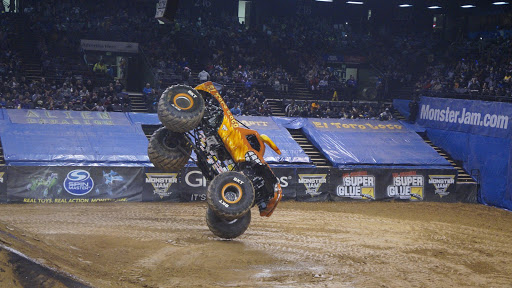 Monster Jam is divided up into events. Each driver receives a score for each event. The winner is determined by the driver with the highest overall score. At the start, trucks raced each other by twos’ around the arena, with some friendly instigating thrown in…. 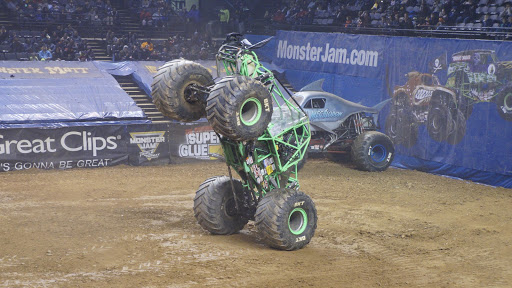 Then the all of the drivers raced around obstacles on ATV’s. 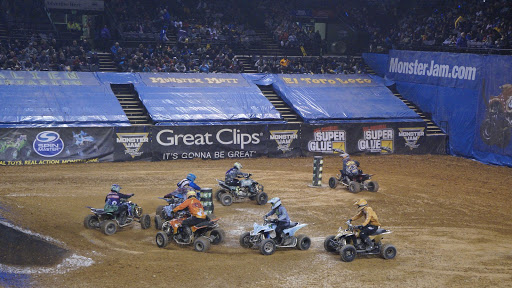 Then the drivers returned to their Monster Trucks and the goal was to spend as much time as they could up in the air and/or on just two (or one!) wheels… 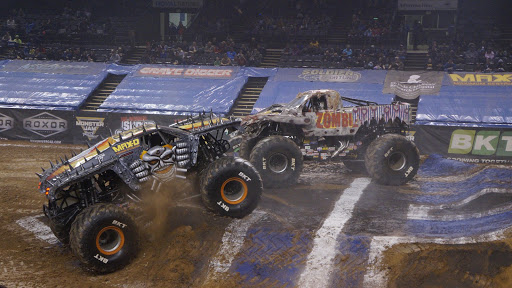 Other events included a donut contest and drivers racing in other vehicles. Monster Jam ended in grand style though with the “freestyle” event. This is where the drivers just showed off. It was the coolest part! Zombie ended up flipped upside down, Max D was on his side, and Grave Digger did a full on back flip. It was awesome!!

So, we had a fantastic time and would totally recommend Monster Jam for great family fun!