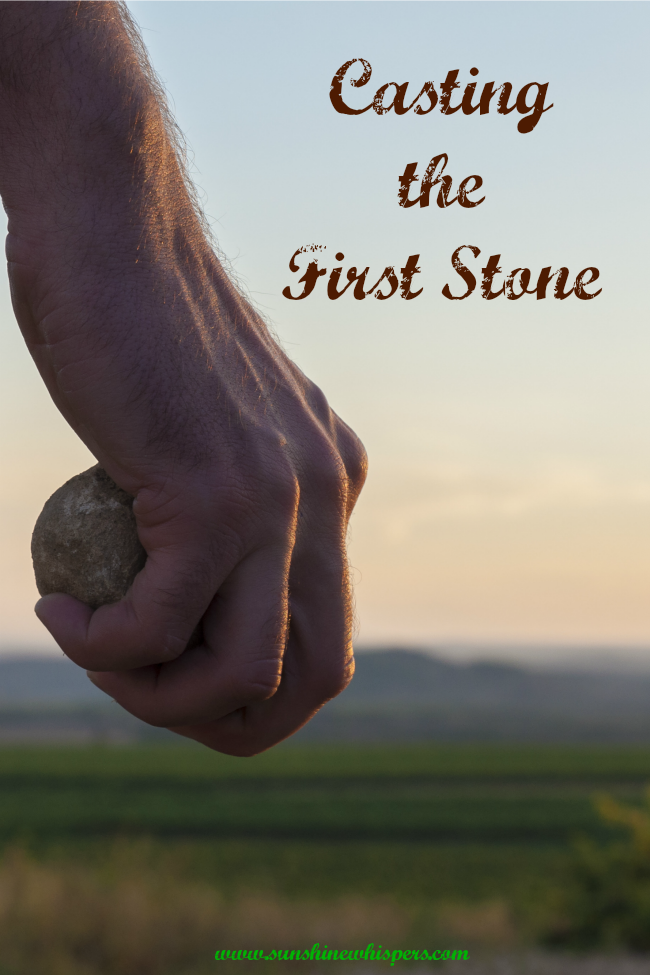 So, we compartmentalize. We categorize. We rationalize.

My feelings were hurt.

I can’t believe they did that!

Wow, that person really screwed up.

This person will never change.

These attitudes and behaviors can result in a ‘mean’ faith.

What is Jesus’ answer to this kind of ‘faith?’

He Who is Without Sin, Cast the First Stone

2 At dawn he appeared again in the temple courts, where all the people gathered around him, and he sat down to teach them. 3 The teachers of the law and the Pharisees brought in a woman caught in adultery. They made her stand before the group 4 and said to Jesus, “Teacher, this woman was caught in the act of adultery. 5 In the Law Moses commanded us to stone such women. Now what do you say?” 6 They were using this question as a trap, in order to have a basis for accusing him. But Jesus bent down and started to write on the ground with his finger. 7 When they kept on questioning him, he straightened up and said to them, “Let any one of you who is without sin be the first to throw a stone at her.” 8 Again he stooped down and wrote on the ground. 9 At this, those who heard began to go away one at a time, the older ones first, until only Jesus was left, with the woman still standing there. 10 Jesus straightened up and asked her, “Woman, where are they? Has no one condemned you?” 11 “No one, sir,” she said.

Try to imagine the scene in which this woman caught in adultery was brought before Jesus.

The thing is, the entire situation was a farce.

The Pharisees knew Jesus would not advocate the execution of this woman. It was such a perfect trap, because in giving her mercy– Jesus would violate the law of Moses. However, if he didn’t show her mercy, not only would that go against his character, but he could then be arrested for flouting Roman law.

It was the perfect trap really.. except that it wasn’t.

Putting aside the fact that the Pharisees literally had murder in their hearts, they once again completely missed the point of faith and righteousness.

They wanted an academic dispute… Jesus was concerned about saving a soul.

The Pharisees were not the only ‘people of faith’ who have ever missed the point. This is unfortunately a common and recurring problem in the community of believers. We, as Christians, are the most guilty of focusing on the wrong thing.. of missing the point.

Casting the First Stone is so destructive to faith because it:

This scene with the woman caught in adultery perfectly illustrates why Jesus called the Pharisees and teachers of the law, ‘white washed tombs’ (Matthew 23:27). On the outside, this group appeared righteous. They weren’t the ones ‘caught in the act.’ However, they were guilty of the kind of sins no one ever gets kicked out of the church for:

As far as Jesus was concerned, the Pharisees and their ilk merely appeared clean. On the inside, their hearts were hard. Their insides rotten.

Many commentators tend to point out that in not judging this woman, Jesus accepted her. That only tells half the story though. Remember, no one in that scene was righteous except Jesus. No one in that marketplace was justified, except Jesus.

It isn’t so much that Jesus did or didn’t judge the woman that is so profound. It is the fact that he offered her a path to repentance, forgiveness, and salvation.

Knowing full well the sins of this woman (and he did acknowledge they were sinful) would be enough to nail him to the cross, Jesus extended grace.

Instead of casting the first stone, Jesus offered love.

Jesus didn’t tell the woman that she could go on living a sinful life. However, by admonishing her to ‘sin no more,’ Jesus accepted that she was a person worthy of love, worthy of dignity, and worthy of grace.

He extends it to you and me as well.

So, if Jesus refused to cast stones, why are we so determined to hurl them?

Why do we set up barriers that deter people with ‘messy lives’ from feeling accepted in Christian fellowship?

Why is the threshold for acceptance super high for people who struggle with sins that are no considered ‘socially acceptable,’ but ‘good Christians’ are never called to repent for the attitudes and lack of love that literally drive people away from God?

Why do we sing about love during worship, but then as soon as the last ‘amen’ is prayed, pick up stones and hurl them at each other?

Maybe, just maybe, we should follow the lead of the only one we should be following.. .Jesus. Paul sums it up like this:

‘Bear with each other and forgive whatever grievances you may have against one another. Forgive as the Lord forgave you. And over all these virtues put on love, which binds them all together in perfect unity.’ ~Colossians 3:13-14 (NIV)

Put down the stones. Love your neighbor. Love your brother. Take up your cross and follow Jesus. Accept his offer of grace.. he has extended his hand especially for you.

Thanks for reading and have a blessed day,
Sara

You said it so well. Self righteousness has no place in a the life of a Christian. We are saved by grace. I loved what you wrote. Thanks for linking up with Grace and Truth.

Quite a challenge, Sara. We ALL need that particular challenge. And we will accept it if our hearts are soft.