Use this super fun trick, inspired by the music of Laurie Berkner, to stop temper tantrums and help your child calm down.

If you are the parent of a toddler or preschooler, you are very aware of the llama drama that is commonly known as the temper tantrum.

Some of the unmistakable symptoms of a temper tantrum include:

The worst part of a temper tantrum though is that it seems like nothing you do as a parent will snap them out of it.

You try to reason with your child– the screaming intensifies.

You threaten, cajole, or otherwise try to discipline your child– the defiance feeds off of that negative energy and your child digs in, ready to outlast your parenting siege.

You try to ignore them but the crying and whining reach a fevered pitch.

Your child is not logical! They are not reasonable. They are in full meltdown mode– all emotion, all BIG, very BIG emotion.

So, why not try something different?

Why not try to surprise them? 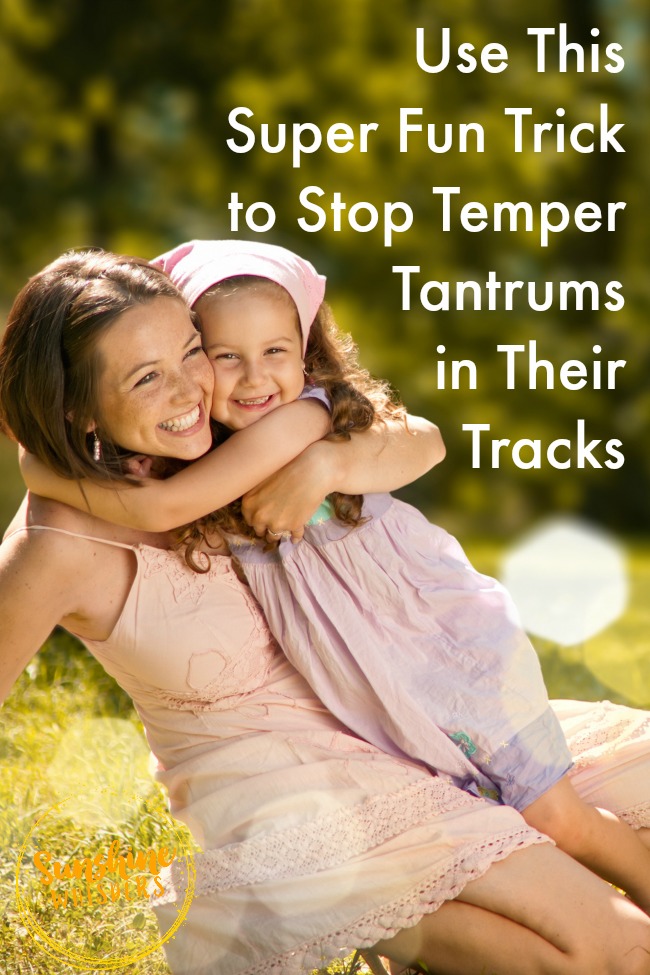 Stop Temper Tantrums in Their Tracks

This is one of the many reasons why I am in love with Laurie Berkner’s music.

I think I first fell in love with Laurie Berkner when my daughter roared like a dinosaur. She was not quite 2 years old and I didn’t even know she had been exposed to music from Laurie Berkner. All I knew was that the music was cute and I desperately needed to listen to something in the car that was not affiliated with Fisher Price.

I had tried other children’s music but it was a mixed bag. Typically, if I loved it, my daughter hated it, which quickly led to ear splitting screams in the back seat. Or, she would love the music and beg for more– but I hated it and would rather have signed up for a root canal than listen to it for more than 5 minutes.

So, when my volatile little spitfire started giggling and singing along with Laurie Berkner’s popular song, ‘We Are the Dinosaurs’

, I knew we had a winner. This music was magic.

As it turned out, her teachers at school held daily dance parties and ‘We Are the Dinosaurs’ was a fan favorite among the toddler crowd. Who knew?

Our love for Laurie Berkner didn’t stop with that ROAR either. Very quickly I discovered that another one of her quirky songs would give me the key to one of the best go-to parenting techniques I have used for stopping temper tantrums dead in their tracks.

What is the song?

Pig On Your Head (try not to giggle).

Have you heard of it? If so, I bet you already know where I am going with this. Here are the basic lyrics of the song:

Well, the second verse builds on the theme and this is where the sheer genius of this song is evident:

When my daughter and I started listening to Laurie Berkner on the drive home each day, we loved giggling at this song. Even at 2 years old, she would help me make up verses– Rachel has a cow on her head– Charlotte has an armadillo on her head– Cruz has a bear on his head. Each time she came up with a crazy animal on the head of one of her friends, we would both start laughing. It was fun and hilarious and a game that even a 2-year old could play.

When nothing else worked

Fairly soon after she got the hang of this sing-songy game, we encountered a much less desirable situation; the temper tantrum.

I tried all the tricks: reasoning, threatening, ignoring… nothing worked.

So, I just stopped what I was doing, looked down at my mess of a daughter and very loudly sang, ‘Mommy’s got an elephant on her head!‘

She paused.. still crying.. but the flailing had momentarily stopped.

And then there was silence. I had broken the spell. There was a temporary truce.

Before I launched into the second verse, I turned to my daughter and asked, ‘What does Daddy have on his head?’

She still had a scowl on her face. So, I followed up with, ‘Does Daddy have a dog on his head?’

I surprised my daughter with joy and laughter and she decided that having fun was a better option than waging WWIII on the kitchen floor.

Why does it work?

I am seriously the last person you would look to for parenting advice. I do not work with kids and my daughter is an only child. But there are some pretty great reasons why this simple game was effective at breaking the temper tantrum spell.

If your child has lost control of their emotions, they really do need to calm down. However, developmentally, it is soooo much better if they are able to calm themselves down, instead of being forced to outwardly calm down by an external factor (namely– you). As a parent this is hard. Sometimes this is the most difficult aspect of parenting, especially if your child is intense or spirited. Think about it though– your child is not calm. So, you absolutely must remain calm and model that calm state to them so they know what it looks like.

Dayna Abraham, the National Board Certified Educator and founder of Lemon-Lime Adventures, has written extensively about temper tantrums and how to effectively stop them. Dayna offers a free 10 day email course on great calm down strategies for kids. In this amazing resource, Dayna cites some of the reasons why calm down strategies (like the ‘Pig On Your Head’ game) are so important for young kids:

Giving kids ownership over their emotions is a big one for me. The sooner my tempestuous preschooler can learn to self-regulate the sooner she– and the rest of the universe that encounters her– will be ‘at peace.’ I can ineffectively try to force her to calm down… but it is so much better when she learns to do it herself.

This simple game is such a fun way to teach calm, stop the temper tantrum, and have a bit of fun in the process.

Try it! I promise it works!

And Speaking of Laurie Berkner… have you heard about her new album?

Seriously? Have you heard about Laurie Berkner’s new album? It has been 8 (!!!!) years since she has released a new album, but a few months ago the drought ended! SUPERHERO

is ALL about having fun with your kids. I was fortunate enough to preview the album and I can personally attest that this album is every bit as quirky and fun as you would expect from this celebrated children’s artist!

There are so many reasons my daughter and I love this album. Some of the songs are super energetic and great for dance parties. Some of the songs are better for snuggling or calming down. Laurie Berkner collaborates with Ziggy Marley on one track, and there is even a reprise of We Are the Dinosaurs! As a part-time musician I really appreciate that Laurie was deliberate in introducing kids to a wide variety of musical styles. Granted, your 4-year old won’t know the difference between reggae, Latin, or pop.. but they will get exposed to it all the same.

If you haven’t checked out the music of Laurie Berkner

yet, click on over and sample it now. I dare you to listen for more than 3 minutes without smiling or giggling.

Maybe that is why it works so well to stop temper tantrums in their tracks!

Top
99shares
We use cookies to ensure that we give you the best experience on our website. If you continue to use this site we will assume that you are happy with it.OkRead more