Thank you so much for being here. This week in the Women Encountering Jesus Bible Study Lesson series, we are taking a peek into the life of a woman afflicted with a debilitating condition, and how her life was radically transformed by the healing power of Jesus’ touch. So, get a cup of hot cocoa, curl up in your favorite chair, and take a few moments of time to reflect. 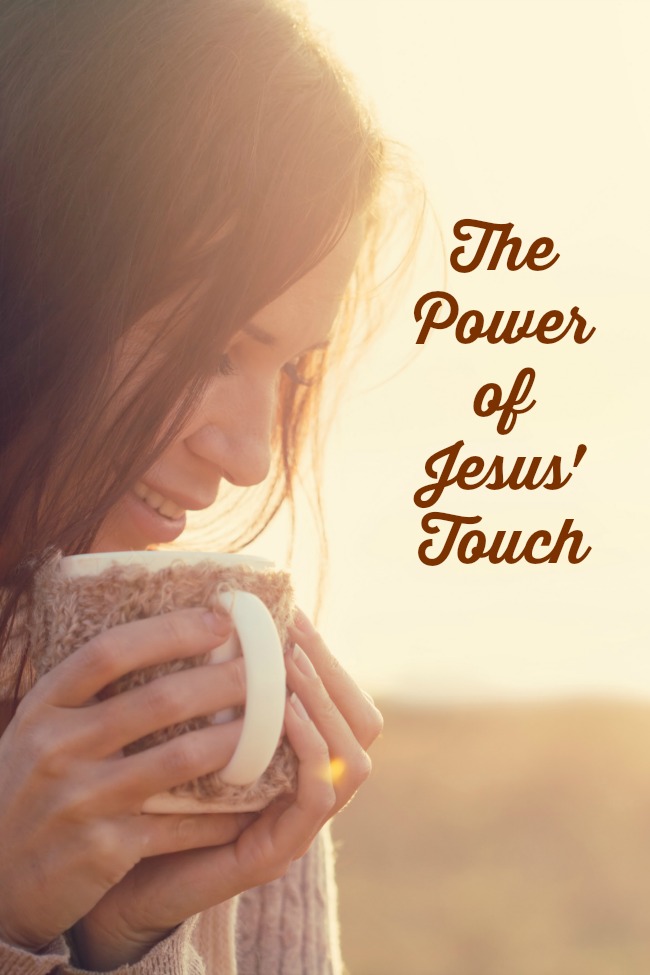 Human beings are made to be ‘together.’ We are made to touch, to fellowship, to be involved in each other’s lives. For many different reasons though, sometimes life just happens and connections are lost, fellowship broken, and touch… non-existent. Isolation, pain, frustration, depression– these are all powerful forces that can make our lives seem hopeless. However, if we reach out to Jesus and allow him to touch our lives, our desperation can be transformed into purpose, our frustration into joy. You see, Jesus is in the business of healing the afflicted, and we are all afflicted. We all need to be healed, to be saved. There is hardly a more powerful example of the saving power of Jesus’ touch than his encounter with the woman who had been bleeding for 12 years.

21 Jesus got into the boat again and went back to the other side of the lake, where a large crowd gathered around him on the shore. 22 Then a leader of the local synagogue, whose name was Jairus, arrived. When he saw Jesus, he fell at his feet, 23 pleading fervently with him. “My little daughter is dying,” he said. “Please come and lay your hands on her; heal her so she can live.”

24 Jesus went with him, and all the people followed, crowding around him. 25 A woman in the crowd had suffered for twelve years with constant bleeding. 26 She had suffered a great deal from many doctors, and over the years she had spent everything she had to pay them, but she had gotten no better. In fact, she had gotten worse. 27 She had heard about Jesus, so she came up behind him through the crowd and touched his robe. 28 For she thought to herself, “If I can just touch his robe, I will be healed.” 29 Immediately the bleeding stopped, and she could feel in her body that she had been healed of her terrible condition. Mark 5:21-29 (New Living Translation)

This woman. This poor, wretched woman. How did she get here? What was her life like before the bleeding started? How desperate do you think she had to be in order to consider tugging at the corner of Jesus’ robe? Let’s take a closer look and gain better sense of this woman’s situation

Suffering from chronic pain and discomfort

Verse 25 states that she ‘had suffered for twelve years with constant bleeding.‘ This woman had a chronic illness, and it was debilitating. Do you know someone who suffers from chronic illness? Maybe you are that someone. It is difficult to describe the physical toll this type of condition takes on your overall health, but it can be devastating. This woman bled constantly for twelve (!!!!) years. She was probably:

In verse 26 we learn that she had suffered a great deal from many doctors. This poor woman had a stubborn medical condition. She would do almost anything to get better. You can relate, can’t you? Everyone has a stubborn problem they would do almost anything to fix. However, relief never comes. This woman had probably tried procedures that were highly experimental, risky, perhaps even painful and humiliating… and for what? Nothing changed. Can you sense her frustration? Are your eyes filling with tears, thinking about your own stubborn problem? It doesn’t have to be a medical condition. Maybe you are frustrated about a different kind of problem:

You have tried everything you can think of to fix it, but nothing works. This woman can relate. With every new doctor who rolled into town, with every new drug that promised the moon, she would hope against hope that this time it would be different. This time it would work. However, every hope would end the same way-  in disappointment and regret. As she walked away from each latest ‘flash in a pan’, she would feel the sting of ridiculousness and chastise herself for even thinking that it would work, that someone like her could ever be healed.

Verse 26 also mentions that this woman had ‘spent everything she had.‘ If you read between the lines you might get the impression that this woman, at one point, actually had some money to spend. She did not start off poor. I wonder if she was from a prominent and well-to-do family. After twelve years of expensive treatments, the result was still the same though.

She had used up every financial asset available to her, and she still had nothing to show for it… except more bleeding.

As if the physical and financial hardships weren’t enough, this woman was Jewish and as such was subject to strict laws and customs that governed ritual purity. According to Old Testament law, this poor woman would likely have been considered ceremonially unclean ever since she started bleeding twelve years earlier. The immediate implication of this law was that no one could touch her. Think about that for a moment. For twelve years:

At a time when she probably needed to lean on her support network the most, this woman was being shunned.

The rules of ritual purity also dictated that anyone who was ceremonially unclean (like this woman), would not have been welcome in the synagogue or any public place. This woman lived a life of compounding horrors. She is in pain, frustrated, no money, no friends, she couldn’t receive the comforting touch of another human being.. and now this. For twelve years, her only spiritual nourishment was whatever she could cobble together for herself. That meant: 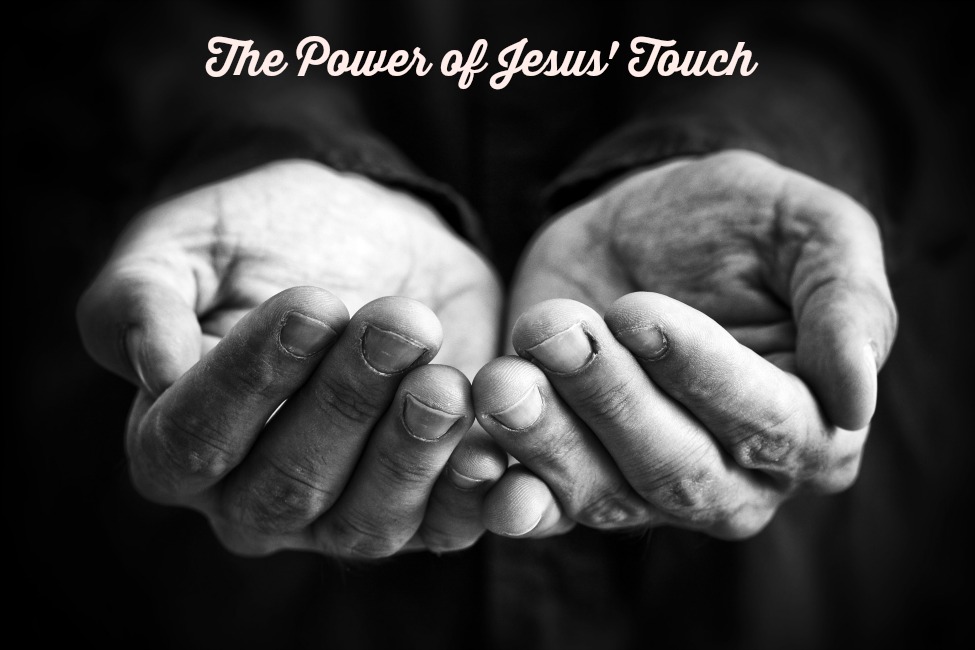 No wonder she was desperate.

No wonder she hatched this crazy plan to reach out to Jesus.

It was risky. Jesus was in the middle of a crowd. What if someone recognized her?

It was risky. If she accidentally touched more than Jesus’ robe.. if she was pushed into him, or grazed his arm, she could make him unclean.

No matter— this was it… It was too risky not to try.

Jesus was her last resort. She had no choice but to reach out to him.

She had no choice but to approach Jesus when she was dirty… unclean… defiled.

And then just like that…. she was healed! Twelve years this woman had suffered. Twelve years! And here is the best part of all– She did not make Jesus unclean. Instead, Jesus made her…clean! After twelve long years of suffering and pain, one touch from Jesus immediately and radically transformed her life:

Hopelessness transformed into a future bright with possibility.

Frustration stepped aside for joy!

Check back in next week for part II of ‘The Power of Jesus’ Touch’ and in the meantime, I hope you have a fantastic week!

Thank you for reading and God bless!
Sara

Previous Post: « Fun Things to Do With Kids in Baltimore: Port Discovery
Next Post: Digging for Treasure Activities for Toddlers »

Merry Christmas Eve! We started celebrating with a

We try to experience at least one Santa Train ever

(Hosted) wow!! My daughter and I got to check out

One of our favorite Mommy-Daughter Christmas tradi

#ad This summer we added a very special member to