I don’t remember your name. After nearly 25 years, I barely remember what you look like. The one thing I will never forget though is the morning my roommate and I were awakened by your sobs.

I remember our group of friends, huddled together with you on the floor of the hallway in our dorm. We tried to comfort you, but really– what could we do? So, we listened. We listened as you tried to tell us what had happened to you the night before. 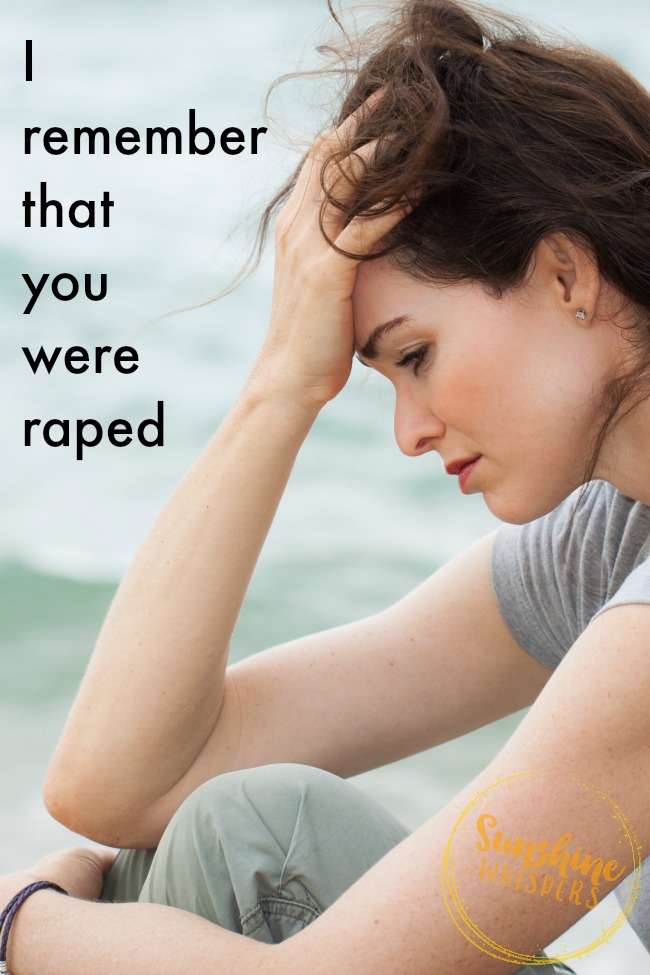 There was a party. Sure, you probably shouldn’t have been there. You definitely should not have been there alone. But you were only 18 years old. Everyone makes mistakes. There is no way you deserved what happened to you.

You had a drink. Maybe you had a couple of drinks? You don’t remember.

Did someone drug you?

The only thing you know is that when you woke up, you immediately felt that you had been violated.

Your panties had been ripped off. There was ‘moisture.’ You were in a lot of pain. As you came to, your tried to collect yourself and your things. You were able to piece together a few details from the other party goers.

You were passed out. They took advantage.

How many? There is no way to know for sure.

But there was one thing you were certain of- You had been raped, possibly by more than one person.

So, you stumbled back to our dorm in the early morning hours. Your roommate woke up to you sobbing uncontrollably in the shower. And then we all huddled on the floor of the hallway in our dorm. We wanted to help you.

Did you go to the clinic? Not yet.

They will take a statement, give you a rape kit. Did you call your parents? Should we inform the dorm mother?

What can we do to help?

I remember that your nightmare did not end with that party. The clinic couldn’t help. You took a shower. The rape kit results would be inconclusive. You washed away the evidence.

They kicked you out of school.

You had been drinking. There were rules against drinking.

You were asked how you could accuse these young men of such a heinous act? You are not believable. Ok, to be fair– I don’t remember the university explicitly telling you you were not believable. However, by expelling you from school after you had been violated in such a violent and shameful way, they might as well have said that.

Less than a week later you were gone. Your parents packed up your things, and I never heard from you or about you again. Just like that.

And now here we are. Another young woman. Another rape. More evidence that the system fails women who are victims of sexual crimes. I wish your story were unique, but unfortunately we both know that many woman have a similar story to tell. Too many to count. Too many that will never be counted because of the misplaced shame and guilt associated with the tragedy.

I am speaking out and telling your story now because I want you to know that I remember you were raped.

I am speaking out and telling your story now because 24 years later, I am a mother. I have daughter. I don’t know you anymore, but there is a good chance that you have a daughter too.

I don’t know you anymore, but I do remember. Your tragedy was not forgotten.

Thanks once again for your words. Speaking out to our young ladies and to those with more days under their belts to make us all aware of peoples hurts and nightmares. May God give them comfort and strong steps to use the future to their advantage not the rapists.

Thank you Diane for your kind words. I just pray that the next generation of women do not have to collectively suffer as much as previous generations. At some point, our society will take this seriously, right?