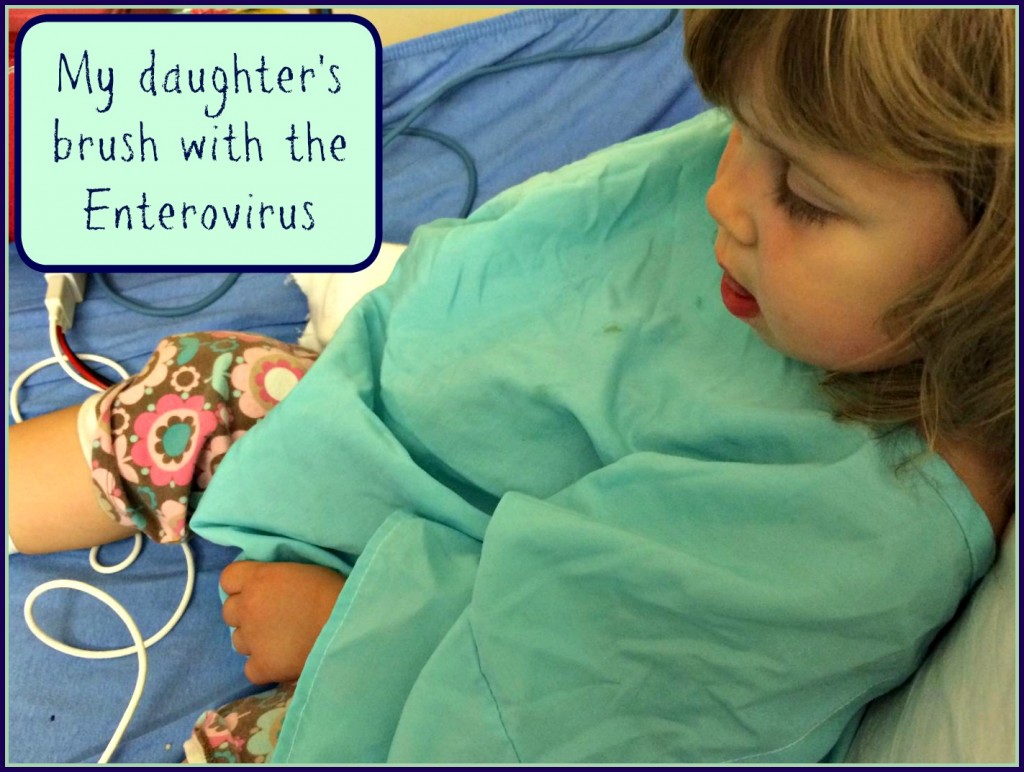 This was not the post I planned to write tonight. Nope, I intended to write about Working Mom Guilt or Tips for Traveling With a Toddler. However, it is amazing how quickly plans change. Yesterday morning we dropped Sweet Pea off at school with a runny nose and a minor cough. By 5pm we were in the Pediatric Emergency Room because she was having significant trouble breathing. We stayed almost 24 hours in order for Sweet Pea to receive breathing treatments. The cause may or may not have been the enterovirus (more on that later). I hope that our experience will inform parents of small children about the enterovirus and what you need to know in order to best protect your kids.

DISCLAIMER: I am not a doctor or any other kind of medical professional. I am a Mom and my medical expertise is limited to putting on band aids and dispensing medicine. This post is solely the experience of our family. Please consult with a medical professional for treatment.

So, what is the enterovirus? According to the Centers for Disease Control and Prevention, the enterovirus (officially called Non-Polio Enterovirus) is “very common and can infect anyone. Most people who get infected with these viruses do not get sick or they only have mild illness, like the common cold. But some people can have serious complications, especially infants and people with weakened immune system.”

Our experience with the enterovirus started probably 2 or 3 days prior to going to the hospital. Sweet Pea contracted a garden variety cold– runny nose, cranky, a little coughing at night– but not much. Really, we just figured she had gotten sick from another kid at school, church, or from us. After all, it is called the common cold. Two days before she started having trouble breathing, she complained that numerous places on her body hurt like her elbow, her knee, her fingers, her arm. Sweet Pea is barely 2 years old so it is difficult for her to articulate what she is really feeling. This definitely complicated our ability to assess the severity of her illness.

The day before our trip to the hospital, Sweet Pea started complaining that her fingers hurt. Again, her complaint was non-specific and we saw no evidence of injury so we kissed her imaginary boo-boo like any good parent would do and sent her on her way to play Disney Princess Castle or put Daniel Tiger to bed. That night, Honeybear and I went on a much needed date night. Up to this point Sweet Pea was her energetic, funny self– albeit with a runny nose. However, her babysitter informed us that she had been coughing a bit. When we went to bed that night we propped up her pillows with a wedge, filled the humidifier and tucked her in extra good. Sweet Pea slept pretty well until about 5AM, when it took about 30 minutes to get her back to sleep after a coughing fit. Still, all of this seemed completely reasonable for a kid who is suffering from a cold.

The next morning Sweet Pea was obviously not feeling well but she didn’t have a fever and we attributed her lethargy to not getting as much sleep as normal. So, we dropped her off at school and went to work. Within an hour, school called to say she had a low grade fever (99.5) and was not acting like herself. Honeybear picked her up and the plan was to feed her lunch, put her down for a nap, and be in the waiting room of our pediatrician’s office when the doors opened for afternoon walk-in appointments at 3pm.

At noon, Honeybear called me concerned because Sweet Pea was having trouble breathing and then called the pediatrician’s office to move her appointment up. By the time they arrived at the doctor’s office, Sweet Pea’s oxygen levels were at 94. Normal range is 95-100. The doctor immediately put her on an albuterol nebulizer (breathing treatment) and round of steroids. Sweet Pea responded a little to that treatment but was given a second breathing treatment before leaving the doctor’s office with a prescription and orders to rest and recuperate.

I had a 3pm meeting and was unable to get an update for about an hour. Honeybear and Sweet Pea were home by 315pm and by 345pm when I got out of my meeting, Honeybear had called, very concerned, because it seemed like the double breathing treatment had already worn off and Sweet Pea was having significant breathing problems. Also, she was clearly scared. I raced home at that point and we were at the pediatric emergency room by 5pm. Throughout the course of the next 24 hours Sweet Pea received one more round of steroids and 11 additional breathing treatments.

When we arrived at the hospital, her oxygen levels were down to 91 and her heart rate was over 200. Sweet Pea was very sick. Thankfully, the aggressive breathing treatments were able to open up her lungs in fairly short order.

So, what caused this? How did Sweet Pea go from a common cold to a breathing condition requiring hospital admittance in less than 24 hours? Well, probably the enterovirus.

However, we will never know for sure because she was not tested for it— and that is part of the problem with this disease. The doctor in the emergency room indicated that Sweet Pea had all the classic symptoms of the enterovirus but they would not test her for it because a) the breathing treatments were helping and Sweet Pea would not be admitted to the ICU and b) It takes 10 days to process the test and by that time, Sweet Pea would be fine.

What should you know as a parent? Well, here are some things we learned:
– Since the enterovirus is a virus, antibiotics will not fix it. It just has to run its course.
– The enterovirus is highly contagious but not everyone exposed will actually present with the more dangerous symptoms. Many people, including many small children will still just have the symptoms of a cold.
– It seems that children with a history of respiratory illnesses like asthma, RSV, and bronchiolitis are more susceptible to the enterovirus.
– The transition from a normal cold to life threatening breathing problems is very rapid— usually transitioning in less than 24 hours.
– Many more kids will have this virus than will be officially diagnosed with it.
– Once breathing treatments start, many kids will have a fast turn around.

What are the symptoms of the enterovirus? The Enterovirus Foundation has a fairly comprehensive list of symptoms. The symptoms Sweet Pea exhibited included:
– coughing
– difficulty breathing
– cold-like symptoms
– low grade fever
– numbness in limbs (not sure this counts but Honeybear and I wondered if the complaining about her fingers hurting might be related)

What should you do if your child has a cold and then starts exhibiting signs of respiratory distress?
– See your doctor immediately.
– Depending on the severity of the breathing problems, you may want to go straight to a pediatric emergency room.

Finally, what can you do to prevent or otherwise safeguard against the enterovirus?
– Honestly, wash hands. Wash your hands frequently. Have your children wash their hands frequently.
– If your child is sick, clean and disinfect surfaces that are touched by you or them and clean/disinfect their toys.
– If your child is sick, keep them home- both so that they don’t potentially spread the disease but also so they are not exposed to it when their immune system is already compromised.

Other than that, there isn’t much you can do.

I will not lie. This was a very scary experience for our family. If you suspect your child is having breathing problems, please just be aware that the enterovirus may be the cause. It is relatively easy to treat with a nebulizer, but please don’t wait to see how it progresses. It can progress very quickly and could land your child in the ICU.

Anyway, Sweet Pea is now home and quite energetic (Did I mention that the breathing treatments cause children to be very wired? It’s great! Mom and Dad get no sleep and kiddo is bouncing off the walls. ‘Sigh’). However, we had quite the scare. I hope this helped inform you as a parent about what to look out for.

If you are concerned about the health of your child though, please seek the advice of a medical professional.

Stay healthy and thanks for reading!
Sara

Previous Post: « Sensory Extravaganza! Whidbey Island With a Toddler!
Next Post: The Servant Heart of a Woman »